‘Song of the Damned’ by Sarah Rayne 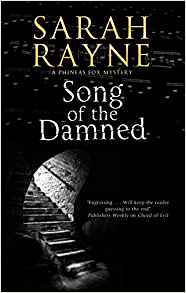 This is the third book in the series featuring Phineas Fox, a professional music researcher.

Phinn is surprised and pleased to receive a letter from Harriet Madely, the headmistress of Cresacre Abbey School making flattering reference to Phinn’s work and recent book, and who hopes he might be able to help her with a rather delicate and unusual matter in relation to their bicentenary celebration’s.  However, mention of the irrepressible Arabella Tallis reminds him that she had off-handily mentioned a couple of events she would like him to accompany her to that called for black tie and dinner jacket, and all became clear.  Mention of a fee rather clinched the matter as Phinn’s quarterly service charge was due.

The request is of course not that straight forward. Historically a member of the Tulliver family is entitled to a seat on the school board. The current Tulliver is Olivia who sees it as her life’s work to get an opera written by her uncle Gustav included in the bicentenary programme.  None of the other members agree, but Olivia is implying that if her request is not granted the funds for the Tulliver Scholarship may be reduced. All Phinn has to do is assess the opera, and as Phinn’s is highly regarded in his field, convince Olivia that it’s not a good idea. Well as Phinn discovers it has already been turned down by everyone of note – so simple.  Then we meet Olivia who is definitely on the odd side and who still lives at Infanger Cottage, inherited from her uncle, a strange and eerie place only accessible along a narrow footpath that is both dark and gloomy and to which sunlight never reaches – so maybe not so simple!

Phinn is immediately fascinated by the school’s former incarnation and the odd legends relating to a group of nuns who disappeared over night more than 200 years ago.  What happened to them has never been discovered and many myths have grown up as to their fate.  On a visit to the old church Phinn sees a carving that disturbs him greatly as it depicts a macabre ritual.

The modern narration is interspersed with diary extracts from the 1790’s by a first-person unnamed narrator.  And so, as Phinn delves into the history so slowly the plight of the missing nuns is revealed.  But there are more sinister secrets closer to home to be discovered. And who was Ginevra, a shadowy figure about whom legend abounds?

Dark and atmospheric in this intriguing story there is mystery upon mystery.  Although a sinister spine-chilling tale of medieval rituals, there are some wonderful light-hearted touches, and some marvellously well-developed characters. I loved it.  And it is of course highly recommended.
------
Reviewer: Lizzie Sirett 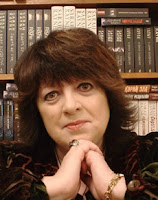 Sarah Rayne's first novel was published in 1982, and for several years she juggled writing books with working in property, pounding an elderly typewriter into the small hours in order to meet deadlines.  Much of the inspiration for her dark psychological thrillers comes from the histories and atmospheres of old buildings, a fact that is strongly apparent in many of her settings - Mortmain House in A Dark Dividing, Twygrist Mill in Spider Light, and the Tarleton Theatre in Ghost Song. She has written more than 25 books to date, and her work has met with considerable acclaim. Her books are also published in America, as well as having been translated into German, Dutch, Russian and Turkish.  In 2011, she published the first of a series of ghost-themed books, featuring the Oxford don, Michael Flint, and the antiques dealer, Nell West, who made their debut in Property of a Lady. Several years ago Sarah also wrote six contemporary horror books, originally under the pen-name of Frances Gordon .