‘The Fire Court’ by Andrew Taylor 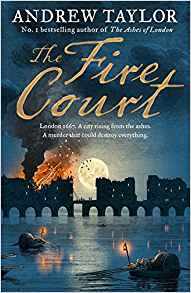 In 1666 London had indeed burned like rotten sticks. Virtually the whole of the city was destroyed. The question then arose: something had to be done. But what? Charles II was determined that London should be rebuilt but there was then a further problem: who should be responsible for the rebuilding? Should it be the freeholders, or the leaseholders? And who was entitled to live in the newly rebuilt London? In order to sort out these problems, a new court was set up by an Act of Parliament – the Fire Court. It was established in Clifford’s Inn in Holborn, then simply a village and not as it is now an integral part of London, which had escaped the Great Fire. It was manned by a number of eminent judges from the King’s Bench, the Court of Common Pleas and the Court of Exchequer. However, unlike the common law courts, its decisions did not establish precedents.

In this, the second of the author’s books set in the reign of Charles II following on from the first book, The Ashes of London (also reviewed in Mystery People), James Marwood is still employed by Master Williamson who in his turn serves Lord Arlingon, one of Charles II’s ministers. And he is still caring for his father, Nathaniel Marwood, the former printer and supporter of Cromwell, now severely demented. One day Nathaniel slips out of the house and follows a woman whom he thinks is his deceased wife but behaving in a way that is clearly lewd and makes his way to Clifford’s Inn. Coming back, he is killed in an accident. James is devastated by this – at first, he thinks that his father’s dementia has led him to behave in this irrational way. But is that the whole story? At the same time, Cat Lovett, who also featured in the preceding story, has now been taken in by the frail elderly architectural draftsman Master Hakeby, nominally as a maid and calling herself Jane Hakeby. Her new situation not only gives her the chance to escape any problem that she might have with her father’s past as a Fifth Monarchist but the opportunity to practise her new interest in architecture at which she proves to be rather proficient although as a woman her proficiency is scorned. A third narrative strand is that of Jemima Limbury; although her husband Philip married her for her fortune (which she will not come into until her father dies) she loves him deeply and hopes, against all the evidence, that he loves her too.

There are a number of plot strands in this book, but, again and again, they lead back to the Fire Court, in particular to a piece of land in the City which is the subject of disputed claims to redevelop. 'Whichever would-be developer wins the approval of the judges of the Fire Court to develop will be able to proceed with the development. But in an age when corruption was rife, the judges of the Court are, remarkably, incorruptible; they will reach their decision on the merits of the respective applications and not on the depth of a particular applicant's pockets nor on which applicant has the ear of the various powerful figures at Charles II's court.'  Fire is also a theme; buildings being largely built of wood. And when fire breaks out people die or are badly burned. The disadvantageous position of women is inescapable as is the cavalier treatment of servants and the ‘lower orders’.

The story comes to a dramatic climax on London Bridge – Old London Bridge, originally constructed in the 13th century and now desperately overloaded with houses, shops, at one time even a palace which caused amazing traffic jams. It wasn’t actually falling down but it is very decrepit. By the eighteenth century many of the buildings were demolished and a rule was established that traffic had to keep to the left – the first in history. In the early years of the nineteenth century it was eventually demolished.

This is an excellent successor to the author’s earlier book. It is to be hoped that the further adventures of James Marwood and the bold and resourceful Cat Lovell will soon follow.
------
Reviewer: Radmila May

Andrew Taylor is a British crime and historical novelist, winner of the Cartier Diamond Dagger (for lifelong excellence in the genre) and the triple winner of the Historical Dagger. His books include the international bestseller, The American Boy (a Richard and Judy selection); The Roth Trilogy (filmed for TV as Fallen Angel); the Lydmouth Series; The Anatomy of Ghosts, shortlisted for the Theakston's Old Peculier Crime Novel of the Year; The Scent of Death and The Times/Waterstones bestseller, The Ashes of London. He lives on the borders of England and Wales. He reviews for the Spectator and The Times.