Last year one of the sell-out events at Bloody Scotland was Douglas Henshall, star of Shetland with Ann Cleeves, the author of the books which inspired the TV series.

This year we are thrilled to reveal that we will be emulating that success with a similar celebrity TV / book pairing featuring Ashley Jensen, star of the TV series Agatha Raisin and well known for her roles in Ugly Betty, Extras and Nativity who will be appearing on stage with M C Beaton author of the Agatha Raisin and Hamish Macbeth novels.

The event will take place on Saturday 22 September 7-8pm in the Albert Halls. 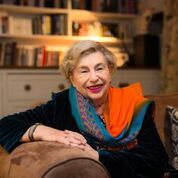 M C Beaton said: I am delighted that the brilliant Ashley Jensen will still be playing Agatha Raisin in the second series to appear on Sky Television in the autumn, three episodes of ninety minutes. I enjoy Bloody Scotland because the organisers are efficient while managing to make it a friendly, almost family occasion.
For further information about Bloody Scotland contact fiona@brownleedonald.com
Posted by Lizzie at 16:40