‘The Case of the Unsuitable Suitor’ by Cathy Ace 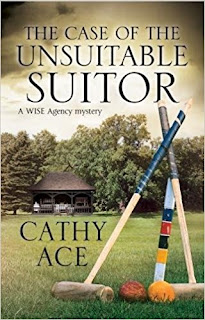 The women of the WISE detective agency are happily settled into the Welsh village of Anwen-by-Wye, their work supported by Althea, the Dowager Duchess of Chellingworth, who enjoys indulging in a spot of detection herself. The WISE Agency gets its name from the countries of origin of its four partners, Carol from Wales, Christine from Ireland, Mavis from Scotland and Annie from England. The four WISE women all have very different backgrounds and bring different skills to the agency.

It is August and Christine has gone to her father’s country estate in Ireland, where she and her boyfriend get caught up in an adventure of their own, involving the illegal production of potcheen and the mysterious abduction of a family servant.

Back in Wales, the Duke of Chellingworth is horrified that a mole has dug holes in his croquet lawn a few days before the match between his team, the Chellingworth Champs, and the village team, the Anwen Allcomers, led by publican Tudor Evans. The Duke is willing to resort to desperate measures, even poisoning the malevolent mole if that is what it takes. However, Tudor has more serious things to worry about than croquet. Huw Hughes, a man who left the village many years ago when he was just a youth, has returned and is trying to establish a relationship with Annie and, to Tudor’s dismay, she is responding to Hughes’ advances. Tudor is attracted to Annie, although she has never realised it. When he asks the WISE Agency to investigate Hughes, Carol assumes it is merely that he is jealous, but she has to admit that it is suspicious that Hughes has had three wives, all of whom died before their time. Knowing how emotionally vulnerable Annie is, Carol is determined to protect her and does some background checking. When she discovers that Hughes’ three wives had all been wealthy women, she begins to fear that Tudor may be correct.

As the women check into Hughes’ past history before he left the village, they discover that he was always attractive to girls and to some women much older than himself. After the grand tea held for the croquet teams and their helpers at Chellingworth, several people become sick and one person dies. When the croquet pavilion is vandalised, it seems as if somebody is targeting the croquet match. Carol, Mavis and Annie try to find out who is behind the crimes, while Carol and Mavis hope to conceal from Annie that they are also investigating her new love interest. While it makes no sense that Hughes should have an ulterior motive in courting Annie, who, unlike his late wives, has very little money, Carol and Mavis are determined to protect their friend and colleague and to discover the identity of the poisoner who is threatening their small community.

The Case of the Unsuitable Suitor is the fourth book in the series featuring the women of the WISE Agency. It is great fun from start to finish, with eccentric aristocrats who could have stepped out of a book by Wodehouse. However, there is also an undercurrent of more serious themes, both regarding murder but also about different types of desertion and betrayal and the effect it has on the victims’ lives, although it is all described with the lightest of touches. The characterisation is warm and witty, evoking a real sense of community, and the plot is clever, with skilful, underlying subtleties. A thoroughly enjoyable read.
------
Reviewer: Carol Westron 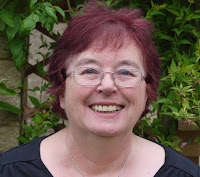