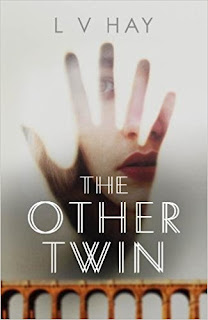 When Poppy Rutledge hears that her younger sister India has fallen to her death from a railway bridge she rushes back from London where she has been living for the last four years to be with her mother Kirsten and her stepfather Tim for the funeral. The police believe that India’s death was suicide and Kirsten is completely devastated by her daughter’s death while Tim concentrates on comforting and supporting her. But Poppy is not convinced. Moreover, in the previous four years she and India had had little contact about which she now feels profoundly guilty. India had not been the sort of person to commit suicide and Poppy is determined to find out the truth. She has already learned from India’s mobile phone with its access to India’s blog that the last person to whom India sent a post was someone called Jenny to whom she writes with great love. But who was Jenny? Is she the mysterious girl who appears at India’s funeral? Poppy then gains access to India’s laptop, which India had jealously guarded during her life time in the hope of finding out more. But the contents are as elliptic as those of India’s mobile and her blog. She comes to rely on Matthew, her former lover for whom she still feels strong emotions. When their relationship had ended, and she left Brighton for London and a series of what were in essence not much more than one-night stands, he had remained behind in the family home with his well-to-do parents, Alan and Maggie Temple, and his twin sister Ana. He suggests that Jenny is in fact JoJo, India’s childhood friend, but is that a dead end? And while Poppy is desperately seeking for the truth about her sister’s death and her mother is traumatised by grief and even solid dependable Tim is coping with, not just Kirsten’s and Poppy’s reactions, but his own distress, she comes to rely on Matthew. But can she really trust him? And whose is the voice of an alternating narrative who is being manipulated by She Who Must Be Manipulated? And who is She and just what is the secret of She’s power?

This clever and intricately plotted book is very much in the new but now well-established genre of domestic noir and will undoubtedly find a wide readership. On the surface it appears to be highly convoluted but the questions for which Poppy must find explanations are in the end satisfactorily answered. Very much recommended, particularly for fans of stories of dysfunctional families.
------
Reviewer: Radmila May

Lucy V. Hay is a novelist, script editor and blogger who helps writers via her Bang2write consultancy. She is the associate producer of Brit Thrillers Deviation (2012) and Assassin (2015), both starring Danny Dyer. Lucy is also head reader for The London Screenwriters' Festival. She lives in Devon with her husband, and three children.