‘The Only Child’ by Andrew Pyper 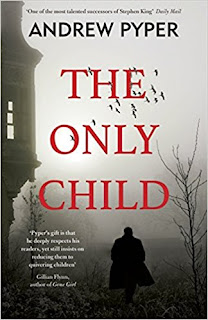 Dr. Lily Dominick is a forensic psychiatrist in a high profile mental institution, often seeing the most challenging individuals and those with the most damaged psychoses.  Her latest patient has caught her attention by intentionally ripping off a complete stranger’s ears.  His reason… to see her.  Her life is then altered irrevocably as her supervisor and mentor is murdered and she finds herself alternatively chasing the murderer and running from him, re-opening up old wounds and parts of her past which may be best left hidden.

Thus, begins a really dark and intense story, which mirrors the gothic horror fantasy of the books and characters, in whose steps it treads.  Frankenstein, Mr Hyde and Dracula all become a part of this intriguing tale which takes the reader from the condos of New York to hotels in Eastern Europe and a cabin in Alaska all the while carrying the thread of horror and gothic schlock.  The tale that is told knits the genre of supernatural with elements of romance, intrigue and thriller.  As you move through the pages you sometimes empathise with the central character of Lily, but also the dominating "stranger" who she is following.

The writing is colourful and tips into a sort of Victorian style at times, totally in keeping with the themes of Mary Shelley, Bram Stoker and Robert Louis Stevenson.  Andrew Pyper demonstrates his skilful mastery of narrative and prose along with a healthy respect for the reader, bringing in these classic strains without undue explanations or over exposure of their storylines.  I could not wait to revisit those and remind myself of their intricacies and characters.
------
Reviewer: Amanda Brown

Andrew Pyper is a Canadian writer of fiction. Born in 1968, he received a BA and an MA in English Literature from McGill University, as well as a law degree from the University of Toronto. Although called to the bar in 1996, he has never practiced. He is the author of five acclaimed novels including Lost Girls, which was an international best seller and a 'New York Times' Notable Book and The Killling Circle (A 'New York Times' Crime Novel of the Year). A number of his books are in active development to become feature films, including The Demonologist, which is being produced by Robert Zemeckis's company ImageMovers and Universal Pictures. He lives in Toronto
http://www.andrewpyper.com/