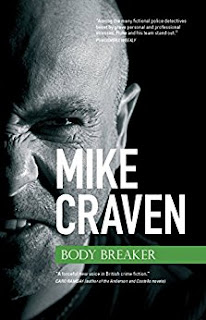 This was the first novel I’ve read by this author and I don’t intend it to be the last. Classifying Body Breaker as a police procedural, simply because it stars a police detective and sometimes his team, would be to force the book into a rigid conformity that its hero, DC Avison Fluke, successfully resists throughout, to entertaining and thrilling effect.

I have never, in the pages of a novel, encountered a policeman who even remotely resembled DC Fluke. ‘Maverick’ would be a terrific understatement, and the usual ‘damaged’ simply does not apply; his experiences, and therefore his insights and behaviour, might be different from the norm, but Fluke is a hugely confident and endlessly resourceful detective. Well aware of his own deficiencies and peculiarities, he also has the intelligence, courage and convictions to take startlingly different routes, ones that while getting him into fizzing hot water also enable him to make progress in challenging situations. And on the way, it makes for a jaw-dropping, superfast read as the grateful recipient of all this fun and drama enjoys a new surprise on every page.

The story starts with the discovery of a hand on Cockermouth Golf Course – Fluke and his multi-talented team are based in Cumbria to the north of the Lake District and much of the story takes place in this attractive area of the country – and the rest of a male body is soon discovered, dismembered and left to the local wildlife to scavenge. Yet Fluke and his team have barely begun investigations when a high-powered team from the London Met arrives saying this is connected to a case of theirs and taking up the reins. Fluke, we suspect, might be rather miffed about this anyway, but immediately after a New Age traveller, Jinx, turns up at Fluke’s cabin in the woods, an isolated home which he shares with his international lawyer girlfriend, Bridie, and reveals information that compels Fluke to take a serious and personal interest in the body on the golf course. Now the London team, led by the insufferable DCI John Reyes, can’t be allowed to keep Fluke out and so Fluke takes a series of actions, outrageous and unpredictable. As I was reading, a very small piece of my brain was also whispering ‘implausible’, but Craven’s taut writing style and absolutely delicious characterisation was more than enough to firmly shut it up.

The action moves quickly – at one point including a trip to Belfast as Fluke’s enlightening back story as a Marine stationed in Northern Ireland during the Troubles is explored – yet this was a book with depth as well as pace, substance as well as humour. I enjoyed that, even while the diverse characters were skilfully, distinctly drawn and their personal stories cast a close-mesh net that pulled me in, the overarching themes of dropping out from society and being other from society in a variety of ways, and of authority and its impact on the individual as well as on communities, engaged me at another level.

I haven’t read such a pleasurable book with a policeman at its heart since Reginald Hill’s Dalziel & Pascoe series, or perhaps Colin Dexter’s Morse or Ruth Rendell’s Wexford. Avison Fluke as a contemporary and very active man is different from any of those creations – although his ability to take a different view perhaps has most in common with Dalziel – yet the quality of his thinking, and the way he is one step ahead of everyone else’s game makes for a character to root for. Most of all, his dedication to his work, and his willingness to risk everything to carry out his investigations in what he knows is going to be the most productive way, are what make Avison Fluke and his adventures in Body Breaker eminently readable.
------
Reviewer: Dea Parkin

Mike Craven was born in Cumbria in 1968, but grew up in the North East. He trained for two years as an armourer (that's gunsmith to you and I) before spending the next ten being paid to travel the world and drink ridiculous amounts of alcohol. In 1995, sick of writing postcards and having fun, he decided it might be time to do something a bit more sensible. And it doesn't get more sensible than doing a law degree. So he did Social Work instead. Two years later he started working in Cumbria as a probation officer. Sixteen years, and a few promotions, later he is still there, although as a crime writer, he now has different motivations for trying to get inside the minds of criminals.
Mike's first DI Avison Fluke novel, Born in a Burial Gown, was shortlisted for the Crime Writers' Association Debut Dagger Award.  He has also written a collection of short stories featuring Fluke and his colleagues from the Cumbrian Force Major Incident Team, Assume Nothing, Believe Nobody, Challenge Everything.  In between joining the army and securing a publishing deal, Mike found time to have a pet crocodile, survive cancer, get married, and buy a springer spaniel named Bracken. He lives in Carlisle Mike is a member of the Crime Writers' Association, the International Thriller Writers' Association, and the Mystery People Group.

DeaParkin is an editor with her consultancy Fiction Feedback and is also Secretary of the Crime Writers’ Association. She writes poetry and occasionally re-engages with The Novel. When she isn't editing, managing or writing she is usually to be found on the tennis court – or following the international tour at home on TV. Usually with several books on the go, she entertains a penchant for crime fiction, history, and novels with a mystical edge. She is engaged in a continual struggle to find space for bookshelves and time for her friends and her cat.