‘Something Evil Comes’ by A.J.Cross 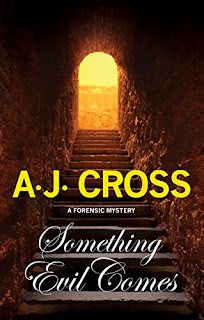 Dr. Kate Hanson is a forensic psychologist who lectures at a Birmingham university and also collaborates with the city’s police service as a member of their Unsolved Crime Unit (UCU).  Hanson shares her home with Charlie, her de facto, if not biological, father, and her talented, but typically tormented, teenage daughter Maisie.  Hanson’s responsibilities, as she juggles these demanding roles, create interest and tension within the police procedural.

When a community police officer witnesses two burglars running away from St. Bartholomew’s Church, he retraces their steps and discovers that they have broken into its dank, dreary crypt, which comes complete with tomb and mutilated body.  UTU officers, Lieutenant Joseph Corrigan and his partner Detective Sergeant Bernard Watts, attend the scene, where they find police pathologist, Dr Connie Chong, is already examining the corpse.  The well-preserved cadaver, it transpires, is likely to be that of Matthew Flynn, a young man who disappeared just over a year before.  Having established that this is indeed a cold case, Professor Hanson is called in to assist with the investigation as the team begin to focus on why he was murdered and who killed him.

Father Delaney the priest in charge at St. Bartholomew’s, Flynn’s dysfunctional family, and Matthew's former roommates, are all possible suspects, but the investigators struggle to discover a motive that will provide a plausible link between any of them and the grisly murder.  The need to find out why Matthew died, becomes more urgent when a suspicious suicide and another murder transform past evil into a very present threat.  Whilst the detectives pursue their enquiries, Hanson’s professional observations and instincts steer her perilously close to the killer.  The narrative accelerates as the accuracy of her findings puts her life in danger.

Something Evil Comes is infused with the professional expertise which A.J. Cross, herself a forensic psychologist, brings to the tale.  The author uses her knowledge and combines it with impeccable storytelling, to weave a plot that teases, excites and thrills.  The book is entertaining and compelling, it keeps the reader guessing from beginning to unexpected end.

This is the fourth novel in the Kate Hanson series, it can be read as the latest in the series, or on its own.
------
Reviewer: Dot Marshall-Gent 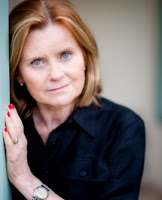 A J Cross is a Forensic Psychologist and frequent court-appointed expert witness. She obtained her Masters Degree and PhD at the University of Birmingham, the latter relating to children as witnesses within the criminal court system.  Anne's professional experience has included consultancy work for the Probation Service in her home city. Anne currently lives in Birmingham with her jazz-musician husband.