‘The Obsidian Chamber’ by Preston & Child 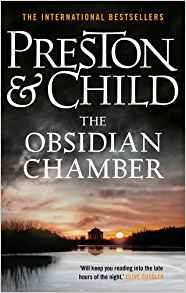 At the beginning of this book, Preston and Child’s main protagonist Agent Prendergast is presumed dead.  His ward Constance has taken refuge in his home and is unknown to her being watched by a mysterious and threatening character from the past.  When she goes missing Prendergast’s faithful retainer, oft protector and friend, Proctor, goes looking for her, only to be caught up in circumstances which prove dangerous and puzzling.

It is to this situation that Aloysious Prendergast returns from the dead.  Moving through the clues and his own uncanny intuitions he starts to unravel the truth and follows a trail of desires, death and double crossing to search for his lost friends.

As the story unfolds Preston and Child create a set of characters which pull out different emotions as you follow them and learn more about their motivations and history.  The key characters Constance, Proctor and Prendergast are not always the ones who you root for in this complex tale. Each time you think you have a handle on who are the heroes and who the villains, actions or behaviours in the story can alter your perceptions.  This leads to an ending which is not tied up with the usual neat storytelling bow, but which is quite satisfying nevertheless.

This book is one of the latest in a long running series which has never been dull and has created an interesting set of main characters and some equally involved supporting roles.  I think to really enjoy this instalment to its fullest, you need to have read some of the others, especially the one immediately preceding it, as there are some references which it is useful to understand.  However, that does not mean that it does not stand on its own as a compelling read, disturbing  in parts and likely to keep me reading future instalments. An enjoyable escapist story.  In fact, I may just go back to the first books once more to be in the company of the enigmatic Prendergast once again.
------
Reviewer: Amanda Brown 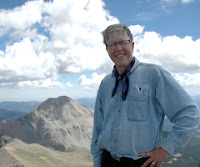 Douglas Preston was born in Cambridge, Massachusetts, in 1956, and grew up in the suburb of Wellesley. He attended public schools and the Cambridge School of Weston. Preston attended Pomona College in Claremont, California, where he studied mathematics, biology, physics, anthropology, chemistry, geology, and astronomy before settling down to English literature. After graduating, Preston began his career at the American Museum of Natural History in New York as an editor, writer, and finally manager of publications. Preston also taught nonfiction writing at Princeton University and served as managing editor of Curator, a journal for museum professionals. His eight-year stint at the Museum resulted in the non-fiction book, Dinosaurs in the Attic, edited by a rising young star at St. Martin's Press, a polymath by the name of Lincoln Child. During this period, Preston gave Child a midnight tour of the museum, and in the darkened Hall of Late Dinosaurs, under a looming T. Rex, Child turned to Preston and said: “This would make the perfect setting for a thriller!” In the early 1990s Preston and Child teamed up to write suspense novels; Relic was the first, followed by several others, including Riptide, Thunderhead and, more recently, Fever Dream and Two Graves
In the year 2000, Preston moved with his family to Florence, Italy, to write a murder mystery set in Tuscany. Instead of writing the novel, however, he became fascinated by the story of a serial killer named il Mostro di Firenze, the Monster of Florence. He teamed up with an Italian journalist, Mario Spezi, who was an expert on the case. In 2008 they published a nonfiction book, The Monster of Florence. The book won numerous journalism awards in both Italy and the United States. Preston has published a number of solo novels, including Tyrannosaur Canyon, Blasphemy, and Impact. Preston was Co-President of International Thriller Writers and serves on the Board of Governors of the Authors Guild. He is a Fellow of the Royal Geographical Society and a member of the Long Rider’s Guild. In 2011, Pomona College conferred on him the honorary degree of Doctor of Letters.