‘You Don’t Know Me’ by Imran Mahmood 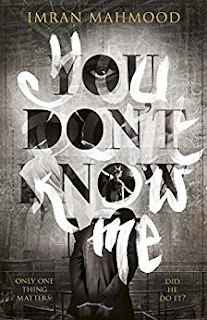 A young black man stands in the dock at the Old Bailey. We never know his name but we do know that he is charged with murder to which he is pleading not guilty. On the last day of the trial he sacks his lawyer and makes his own closing speech to the jury, not, he says, because the lawyer, a QC, isn’t good, he is, but because he wants to tell a story that no-one else knows and disclose facts that would otherwise be unknown. The story which he tells himself in his own words is the story of his life from his childhood, when he and his sister Blessing are brought up by their Nigerian mother who is strong and encourages them to do well, but his violent, drug-abusing father makes life difficult for them all. The area where the narrator is brought up is riven by gangs but the protagonist avoids being drawn into any gang activity; he is highly intelligent although he gained little from school, but his love is cars and he makes a decent living out of buying and selling them. And he is living with the beautiful Kira. What can go wrong? But it does. Kira’s jailbird brother, desperate for an early release from prison, makes a terrible bargain which wrecks his sister’s life and the lives of all around her.

The narrator begins by going through the evidence against him. Some of it seems pretty thin: He and the victim came from the same area, he was heard to threaten him (except that his words were misinterpreted), a young man wearing a hoodie similar to one owned by the defendant was seen arguing with the victim. Other evidence is rather more compelling, bullets from the gun found in the defendant’s flat, bloodstains, hairs, all link him to the victim. But how reliable are those links? The defendant insists that he is not guilty, but those who could provide evidence in his favour, Kira, and his lifelong friend Curt, have disappeared.

However, what makes this book so compelling is the picture it provides of the environment in which the black community have to live. So many young boys are drawn into gangs, seduced by the violence and the glamour. Once they’re involved they can’t get out; not only by the all-pervasive drug culture, but by threats against their lives. The gang culture infects the lives of everyone in the community. It is a world that the writer, who is a criminal defence barrister who practises in the London Crown Courts and in the Court of Appeal, knows well and I feel that it is very much fuelled by his concern that so many of these youths have been failed by society. I also felt that, although the world depicted is one in which women are not much more than commodities it is they who are the true heroes, especially the narrator’s strong mother, of that world. And Kira, although very much a victim, is also a femme fatale in the classic noir tradition.

Will there be a sequel? There are some explosive revelations at the end of the book exposing the truth about the killing and the shadowy role of state security services. But at this final stage of the trial at first instance there is no evidence to support them. However, if the protagonist is convicted would it be possible for some of that evidence to be made available for an appeal to the Court of Appeal? Or even at some time in the future for reconsideration by the Criminal Cases Review Commission?  I would really like to know. Meanwhile You Don’t Know Me was chosen by Radio 2’s Book Club and has been extensively and deservedly praised in reviews.

Imran Mahmood is a Criminal defence barrister with over twenty years' experience in the Crown Court and Court of Appeal. He specialises in Legal Aid cases involving crimes such as murder and other serious violence as well as fraud and sexual offences. He was born in Liverpool and now lives in London with his wife and daughter