‘The City in Darkness’ by Michael Russell 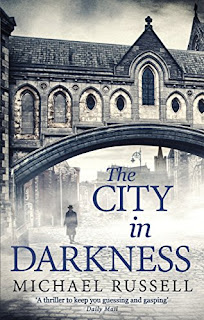 In rural Ireland, one Christmas Eve, a village postman, Billy Byrne, vanishes. The other villagers deny all knowledge as to where he has gone or what might have become of him. In County Wicklow, Ireland, in 1932, a young woman called Maeve, while swimming in the Upper Loch, Glendalough, is deliberately drowned by someone she knows. In 1937 in Spain, deep in the throes of a bloody civil war where atrocities are being committed by both sides in the conflict, some Irishmen have joined the Republican cause, others the Nationalist. One of the Republican Irishmen is committed Communist and IRA supporter Frank Ryan, but for all that when young Nationalist Mickey Hagan is captured and threatened with summary execution Ryan intervenes and saves his life. And in December 1939, when England had declared war on Germany but little actual fighting had taken place while the Irish Republic remained neutral, Detective Inspector Stefan Gillespie of the Irish Special Branch is occupied with checking up on the numerous Irishmen who for one reason or another had joined the British forces. Stefan himself is the protagonist in the two previous novels, City of Shadows, set in Ireland and Danzig in 1933, and City of Strangers, set in Dublin and New York in 1938. He is essentially an outsider, his father being an Irish protestant, his mother German. From her he has learned fluent German, and from his outsider status he is better able to empathise with the English point of view – or so his boss, the outwardly affable but in reality devious Superintendent Terry Gregory, appears to think. And a fourth plot strand is introduced when Stefan overhears Gregory discussing with senior IRA official Cathal McAllister plans for a raid by the IRA on a Dublin Arms depot: for all the past, the Irish Government now has no wish to encourage the IRA which is still fighting its war against the British with tacit German support. All in all, Stefan is glad to get away for Christmas to the village where his parents and his beloved little son Tom especially since Kate will be with them.

But it is then that all these plot strands begin to come together when Stefan is sent by Terry Gregory to the village where the postman went missing. He has mixed feelings about this, because the village is near Glendalough where Maeve died and because there are suspicions back in Dublin that the local police are dragging their feet over the investigation. But it is when Stefan goes through Billy Byrne’s desk that he finds grounds for suspecting that Maeve’s death was not an accident and that other young women had died or disappeared. Moreover there are mysterious payments into Byrne’s bank account. And correspondence between Byrne and others who, like him, had been with the Irish contingent on the Nationalist side one of whom was none other than Mickey Hagan. So when Stefan is required to accompany the Irish ambassador to Spain to Dublin it gives him the opportunity to continue the search for the truth about Maeve’s death but it also draws him into the morass of what is going on first in Spain then in Portugal, both countries neutral, endeavouring to stay out of involvement in the war which we know will overwhelm not just the rest of Europe but the whole world.

The City in Darkness is the third in this excellent series and has been nominated for the CWA Historical Dagger. The various plot strands are woven together in a complex web which is eventually unwound in a highly satisfying manner. In order to understand the plot, it is not necessary to read the earlier books but to do so would enhance enjoyment of this title. Some of the characters have appeared in those books and they also include notes describing the historical context, particularly that involving the newly founded Republic of Ireland, of the events in each book. It might have been helpful if this volume had given an outline of the Spanish Civil War but no doubt a resume is available via Wikipedia and other sources. I do very highly recommend all three books and am looking forward to the next one, City of Lies, set in Ireland and Berlin, which is published this year.
-------
Reviewer: Radmila May 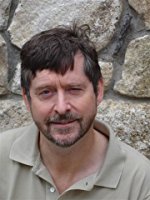 Michael Russell has a degree in English and began his career as a script editor on ITV’s Emmerdale Farm later becoming series producer, then a script consultant and then producer in ITV’s drama department. He left ITV to write full-time. He has contributed regularly to Midsomer Murders and scripted the last ever episodes of A Touch of Frost which topped the ratings. He now lives in County Wicklow, Republic of Ireland, with his family, ‘not a million miles from Stefan Gillespie’s home’, and writes full-time. His two previous Stefan Gillespie novels have been shortlisted for Crime Writers’ Association awards as has City of Darkness. Although City of Darkness does not have the historical background notes that the two earlier ones have, on the author’s website there is a long and fascinating article included under the heading ‘War’ discussing not just the role of Ireland in World War but also that of Spain and Portugal under their respective dictatorships.