‘Dying to Live’ by Michael Stanley 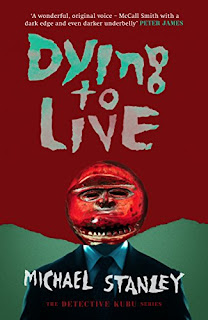 This is the sixth in the Detective Kubu series and once again features Detective Bengu, widely known as ‘Kubu’ which means Hippopotamus in Setswana, the language of the people of Botswana, from his considerable size due to his substantial appetite. Like the earlier titles it is set in Botswana. It begins with the discovery of the body of an ancient Bushman in the Kalahari Desert. Forensic examination reveals that his neck had been broken. The odd thing is that although his skin and bones are undoubtedly very old his internal organs are those of a much younger man and in his body there is, for instance, a very ancient bullet dating from decades ago. He had not been alone when he died; footmarks of at least two other people had been discovered near the body. So it is an interesting puzzle for Kubu. And when the Bushman’s body is stolen from the morgue the puzzle becomes extraordinary – why should anybody do such a thing? Meanwhile, his colleague Detective Samantha Khama has been told to investigate the disappearance of a witchdoctor, Botlele Rama, famous for knowing a recipe for long life. She questions two of the four people who saw him last but they cannot assist. The other two, an American anthropologist, Christopher Collins, and a man apparently rejoicing in the name ‘Hair On’ are more difficult to trace. However, it appears that the Bushman had been seen talking with Christopher Collins. Is there a link between his death and the disappearance of witchdoctor Rama? Or, when Rama’s car is found abandoned, something worse? And then Collins’ car is found also abandoned. The separate enquiries pursued by Kubu and Samantha take them both into a mesh involving rhino-horn smugglers, Chinese gangsters, widespread corruption, and other problems which converge, then diverge, then converge again. And if this was not enough, Kubu’s adopted daughter NoNo, already known to be infected with HIV, is becoming ill; do her alarming symptoms indicate the growth of AIDS? Kubu’s wife Joy is so desperate that she consults a witchdoctor.

This novel, by the authors collectively writing as Michael Stanley, is an excellent addition to the series. Kubu is that rare creature among series protagonists, particularly police procedurals, a likeable detective, his marriage is happy, his concern for not only NoNo but his mother, widowed in the last book of the series, his support of Samantha and the Bushman Constable Ixau, are commendable. The picture of life in Botswana, while rather harder-edged than that presented by other writers, is presented with affection and respect and at the same time has a thoroughly authentic feel to it. There is a glossary of words, and also, since there are a substantial number of characters, a list of characters – something which some other writers could well do. Recommended.
------
Reviewer: Radmila May

Michael Stanley is the writing name of Michael Sears and Stanley Trollip. Both natives of Africa, they have travelled regularly together to Botswana and Zimbabwe over the past twenty years to experience the country with its wide diversity and interesting peoples. Their books reflect the authentic Africa of the 21st century: not merely the politically unstable, desperately poor Africa of the nightly news, but also the emotional conflicts of people with one foot in traditional culture and the other in Western-instigated globalism. The new Africa is not the safari jungle, but a collection of diverse groups and nations struggling to find their way in a rapidly changing context. It was at the lion research center in the Savuti, an ancient dried-up lake in Botswana's Chobe National Park, that they realized how to conceal a perfect murder. They watched a hyena’s team up to drive lions off their fresh kills, then devour everything in sight, bones and all. By the next morning, no evidence remained of the carcass. Botswana offered the ideal setting for such a literary revelation. This was the kernel of the idea that led to our first book, A Carrion Death
http://www.detectivekubu.com/