‘Rooted in Evil’ by Ann Granger 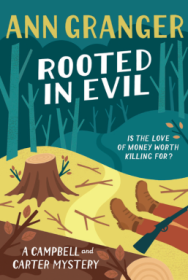 When the distraught Harriet (Hattie) Kingsley tells her best friend Tessa Briggs that she has found a dead man in the Crooked Man Wood, and what is more, although part of his face is shot away presumably with the shotgun which is lying across his body, she thinks the body may be that of her stepbrother Carl Finch, Tessa tells her that it should be reported to the police straight away. Harriet is so hysterical that Tessa offers to report it in her place; her excuse for being in the woods will be that she is taking her dog Freddie for a walk. But when Tessa gets to the place where Harriet told her she had discovered the body she finds that it has already been discovered by Tom Palmer who, suffering from a bad cold, has taken the day off work from his job and informed the police. Not only are the uniformed police on the spot but there are detectives in the shape of Inspector Jess Campbell and Sergeant Phil Morton: Tom’s profession is that of forensic pathologist and it looks to him as if the death is neither suicide nor accident. But Tessa, Harriet and Tom are not the only people about in this particular Cotswold wood. Even at the back end of January, it is a favourite walk for many people including amateur artist Sally Grove who had heard a shot but assumed it was the local clay pigeon shooting range. Harriet is beside herself in case the police discover that she had not only discovered Carl’s body but that she had arranged to meet him: Carl is in fact a feckless sponger and full of resentment that his stepfather, although when he married Carl’s mother, very much a New Age hippy, he had been happy to take Carl on as well, had left the boy virtually nothing in his will. Carl had gambling debts and owed the elderly but quietly sinister Edgar Alcott quite a large sum of money – and Edgar wants the money soon. Harriet, however, had resolved not to give way to Carl’s demands for once and was prepared to stand up to him, which is why she had arranged to meet Carl in the woods. But it looks bad for Harriet so Tessa tells Harriet not to admit, even to Guy, that she had been in the woods at all. Harriet can barely maintain the deception but her fragile state can be explained by the news about Carl.

It is always a pleasure to read any of Ann Granger’s mystery novels, very much in the traditional vein and consequently in their quiet way highly popular with readers. There are some splendid characters; not just bossy Tessa, the sinister Edgar Alcott but the argumentative carpenter Derek Davies who shoots down all Guy’s unrealistic proposals for various alterations to carry out his far-fetched plans which are meant to transform their home. Highly enjoyable.
------
Reviewer: Radmila May 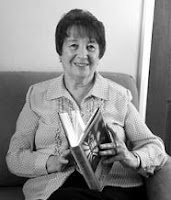 Ann Granger has worked in British embassies around the world. She met her husband, who was also working for the British Embassy, in Prague, and together they received postings to places as far apart as Munich and Lusaka. She is the author of the Mitchell and Markby Mysteries, the Fran Varady series and more recently the Lizzie Martin mystery series. She lives in Bicester, near Oxford.