‘Reconciliation for the Dead’ by Paul E. Hardisty 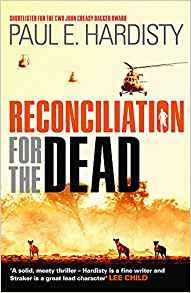 Reconciliation for the Dead is the third volume of a four-part series featuring Claymore Straker, a former SADF (South African Defence Force) paratrooper. It follows The Abrupt Physics of Dying (set in the Yemen in the early nineties) and The Evolution of Fear (set in Istanbul and Cyprus). There is a common theme to all three novels: how governments and huge corporations are conning us, wasting and destroying both human beings and the natural environment.

In Reconciliation for the Dead it is the South African apartheid government, military establishment and BOSS (Bureau of State Security i.e. secret police). The novel starts with Clay (as he is known) in his hotel in Maputo, Mozambique. He has just left South Africa where he has been testifying to Archbishop Tutu’s Truth and Reconciliation Commission, about a massacre of civilians in Angola, in which he had participated. We now switch back thirteen years or so to the Namibian-Angolan border in 1980. There is a vicious civil war between two factions who had been allies in the independence struggle against the former colonial power, Portugal: the MPLA, now in government, supported by the Soviet Union and Cuba, and UNITA with its ally, South Africa. This war is presented to the young naïve soldiers as a war of self-defence against communist aggression. In fact, it is, as Clay comes to realise, a race war.

Clay and his philosophical friend Ebben are sent on patrol (authorised by an officer who is a member of Torch Commando, a clandestine group of dissident white South Africans) into Angola in order to report back on secret activity carried out by certain elements in the SADF and secret service in collusion with UNITA. They witness medical experiments supervised by a Mengele-type character known as Doctor Death (this is based in fact). Later, Clay meets Vivian, a doctor in a military hospital where he is being treated. She persuades him to help her gather information on this sinister programme.

Other important characters are his friend Brigade, a black tracker working for the SADF, and, above all, his commanding officer, nicknamed Koevoet or Crowbar, a consummate professional killer, nevertheless an inspiring leader who has won the devotion of his men. All these characters are well-drawn and interesting.

Interspersed with the narrative are excerpts from the Commission hearing, in which Clay’s reliability as a witness is subjected to considerable doubt.

Lastly, let me say that Hardisty writes brilliantly, combining sharp, punchy narrative with beautiful reflective and descriptive passages. I can’t wait for the next, and final, instalment. Readers might also be interested in an interview with Paul Hardisty in Mystery People in which he talks about his writing.

Canadian-born thriller writer Paul E. Hardisty has lived all over the world in his career as a professional scientist, hydrologist and engineer, and is now settled with his family in Perth, Australia, where until just recently he was Director of Australia’s national water, land and ecosystems research programmes, and he is an adjunct professor at Imperial College, London, and at the University of Western Australia.  In addition, he is a pilot, sailor, outdoorsman, and conservation volunteer. And in all this, he has found time to write in vivid, eloquent prose three long, fast-paced, action-packed, complex eco-thrillers, with a fourth one coming out soon. In all those the protagonist is South African Claymore Straker, very much the action man but whose experiences over many years, which take him on what might be called the classic ‘hero’s journey’, lead him to view the world very differently in his maturity to the way he viewed it when young.
Ranald Barnicot is a recently-retired teacher of EFL/ESOL, who has worked in Spain, Portugal, Italy, and the U.K. His last employment was at Barnet and Southgate College, London. He is perhaps less of a connoisseur than other contributors to his site but enjoys reading thrillers and crime fiction. His main interest, though, is writing poetry – these days mainly translations. He has had both original poems and translations (Catullus, Horace, Verlaine) published in various journals (print and online). He is married and had two daughters.
Posted by Lizzie at 16:22