‘You Were Never Really Here’ by Jonathan Ames 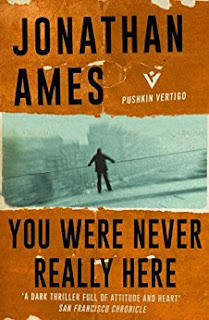 Joe is an ex Marine and former FBI agent whose experiences working for those organisations almost destroyed him.  He has managed to pull himself back from the brink and now lives with his eighty year old mother whilst working as a private detective out of New York City.

Joe gets his assignments from McCleary.  A former private investigator in his 60s, McCleary tries to forget his loneliness by hard talking and drinking.  Joe is given the task of finding a 13-year-old daughter of State Senator Votto.  The girl has been missing for six months but now Votto thinks he has lead and has asked McCleary to help him because he doesn't want the police involved.

What follows is anything but cosy; as Joe investigates the case he puts himself and many of those around him in peril.

This fast moving 92 page crime mystery novella is action packed and highly readable.  It will appeal to those who, like me, enjoy hard-boiled thrillers in the style of Chandler and delicious one-liners like:

“It frightened even the hardest men to have their fingers snapped, and in a fight, like a dance, you often held hands.”

Jonathan Ames was born 23 March 1964 in New York City. He attended Columbia and Princeton University. He is a novelist, essayist, creator of the beloved TV series Bored to Death and Blunt Talk, and is celebrated not only for his comic sensibilities and devotion to the absurd but for his lurid attraction to inner demons. He lives in New York.

Dot Marshall-Gent worked in the emergency services for twenty years first as a police officer, then as a paramedic and finally as a fire control officer before graduating from King’s College, London as a teacher of English in her mid-forties.  She completed a M.A. in Special and Inclusive Education at the Institute of Education, London and now teaches part-time and writes mainly about educational issues.  Dot sings jazz and country music and plays guitar, banjo and piano as well as being addicted to reading mystery and crime fiction.
Posted by Lizzie at 10:59