‘The Lost Swimmer’ by Ann Turner 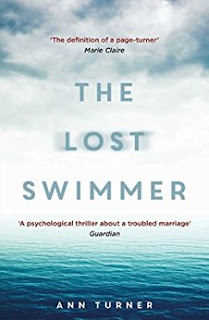 Do we really know the people closest to us? What are they capable of? These are the premises of The Lost Swimmer.

Mostly set in the academic world of Coastal University, Australia, the book depicts the politics, budget cuts and redundancies, and infighting of a modern university struggling to compete and stay at the top of the academic tables.

Stephen and Rebecca Wilding are both lecturers at the university. Stephen is professor of economics and Rebecca, the narrating character, a professor of archaeology and head of her department. Rebecca, has worked hard to get to the top of her profession, writing papers, appearing at conferences and leaving childcare to Stephen so that she could forge her career. Now the children have left home and Rebecca suspects Stephen is having an affair with one of her colleagues.

As part of her role as head of department, Rebecca organises archaeology trips abroad, and when discrepancies in the accounting are uncovered Rebecca is accused of fraud. Afraid she is about to lose everything, Rebecca sets about her own investigation into both the fraud and Stephen's affair. Using the same rationale that she would apply to her archaeological work, Rebecca analyses everything that is going on and the story builds slowly, gathering pace when the couple travel to Europe for a holiday and professional engagements and where on the idyllic Amalfi Coast Stephen goes for a swim and does not return.

The book has mixed reviews and this seems to be partly because it has been marketed as literary and a page-turning thriller which reviewers are arguing that it is neither. I would class it as a slow-burn mystery with a strong sense of place.
------
Reviewer Christine Hammacott

Ann Turner was born 10 December 1945 in Massachusetts. USA. She is an award-winning screenwriter and director, avid reader and history lover. Her films include the historical feature Celia starring Rebecca Smart - which Time Out listed as one of the fifty greatest directorial debuts of all time - Hammers Over The Anvil starring Russell Crowe and Charlotte Rampling, and the psychological thriller Irresistible starring Susan Sarandon, Sam Neill and Emily Blunt.
www.annturnerauthor.com

Christine Hammacott lives near Southampton and runs her own design consultancy. She started her career working in publishing as a book designer and now creates covers for indie-authors. She writes page-turning fiction that deals with the psychological effects of crime. Her debut novel The Taste of Ash was published in 2015.
Posted by Lizzie at 11:56