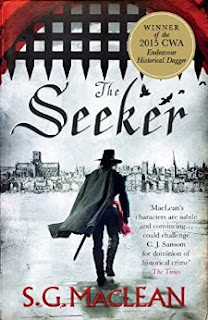 In 1654, six years after Charles I was publicly beheaded in front of his royal palace of Whitehall, Oliver Cromwell, leader of the Parliamentary forces who had defeated the King’s forces in a long series of bloody battles, was securely established as Lord Protector of England, king in all but name and now ruling without Parliament. Cromwell was supported by the Army which he had fashioned into a mighty force but nonetheless it was a time of plots and counterplots with factions on all sides ranging from those supporting the exiled Charles II, son of Charles I, in his penurious court in the Netherlands to various brands of religious and political extremists. Many of these are in London, in disguises of various sorts and using all sorts of elaborate codes to avoid discovery while at same time issuing inflammatory pamphlets. John Thurloe, Cromwell’s Secretary of State and master of a network of intelligence that reaches into every corner of Europe, is tasked with ensuring Cromwell’s safety, and his right-hand man is the mysterious Damian Seeker, Thurloe’s investigator and enforcer. One particularly fanatical pamphleteer is the radical but impecunious lawyer Elias Ellingworth who frequents Kent’s coffee house in the City of London so when he is discovered by Seeker in Whitehall standing over the dead body of John Winter, hero of Cromwell’s army, with a bloodied knife in his hand he is the obvious suspect and is immediately arrested and taken to the Tower of London. But Seeker is not satisfied that the murderer is Ellingworth; what, for instance, was Winter’s wife, Lady Anne doing earlier that day in Kent’s coffee house? And who was the Scotsman who had taken her back to her husband’s Whitehall lodgings? And can Elias’s beautiful sister Maria cast any light on why her brother had gone to Whitehall? And are the old Cromwellian soldier Jacob Kent and his niece Grace hiding anything from Seeker? And among the various customers of Kent’s coffee house are various Scots and Dutchmen – are they involved in any way? In order to unravel these and other riddles Seeker must traverse not only the courts and alleyways of London, as it was before the Great Fire of 1666 of London, but also Oxford where loyalty to the Stuarts is still strong and the new coffee-house culture as strong as in London.

I was as impressed with this novel, the first of a new series featuring Damian Seeker and winner of the 2015 Crime Writers Association Endeavour Historical Dagger, as I was with her earlier Alexander Seaton sequence, reviewed in the Mystery People blogspot for April 2015 (www.promotingcrimeblogspot.co.uk/2015-05-01_archive.html ).

The plotting is complex yet meticulous with hidden clues strategically placed, the historical context detailed and convincing, and the characters well delineated. The next Seeker novel is to be published in a few months and I look forward to reading it. Highly recommended.
-------
Reviewer: Radmila May