‘The Wednesday Club’ by Kjell Westo 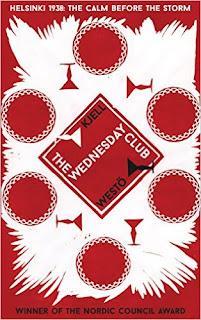 Helsinki 1938. The author of this novel is a major Finnish writer. In the novel Claes Thune is a lawyer with an established and successful practice but he does not find his life very fulfilling particularly since he misses desperately his recently divorced wife Gabi. Even meeting informally with his friends every Wednesday is insufficient to fill the gap in his life. He is tormented by memories of what he had and what he has lost. And the growing political uncertainties in Europe propelled by Hitler’s rise to power and his expansionist policies add to the atmosphere of impending doom which hovers over even life in such a quiet backwater as Finland, not, as we learn in this novel, that life in Finland has always been so quiet. Claes’s friends are five in number representing the various strands in Finnish society: Robert Lindemark, a psychiatrist and friend of Claes since boyhood, Guido Roman, a journalist, the Jewish Joachim Jary, a poet and actor, Leopold Gronroos, a businessman, and Lorens Arelius, a doctor. But the relationships between the friends are not altogether happy, particularly that between Lindemark and Claes since it was for Lindemark that Gabi left Claes.

One evening, when Claes is so preoccupied with thoughts of Gabi and his feeling of jealousy of Lindemark that he barely takes in what is going on around him, there is a violent disagreement between the friends about the attitude to be taken to Hitler: Lindemark as a Social Democrat is uncompromisingly opposed to Hitler and all he stands for, Roman dismisses Hitler as an empty threat, while Arelius and Gronroos, although disapproving of some of Hitler’s policies, speak admiringly of his revival of German industry and of the way in which Hitler’s policies had substantially reduced unemployment. Jary, who is unstable, is currently in a psychiatric hospital and in his absence Arelius and Gronroos express some reservations about Jews to which Lindemark reacts furiously.

Meanwhile, Claes’s efficient new secretary, Mrs Matilda Wiik, recognises one of the angry voice; it takes her back to a time that she wants desperately to forget but cannot, a time of civil war twenty years before when Finland was bitterly divided between the largely Swedish middle and upper classes (the Whites) who had inclined towards the German side in World War I and the largely Finnish proletariat (the Reds) supported by the Russian Bolshevik regime which had come to power in 1917. She had been taken prisoner by the Whites and traumatised by the experience while thousands of her fellow-prisoners died. Even in 1938 Finnish society was deeply scarred by that war.But Matilda is no longer that helpless victim.

Kjell Westö is a Finnish author and journalist. Born 6 August 1961 in Helsinki, Finland. He was educated at the University of Helsinki. Westö writes in Swedish. In 2006, Westö won the Finlandia Prize for his novel Där vi en gång gått.