On the 12th May 2016, His Excellency the Ambassador of Luxembourg to the United Kingdom, Mr Patrick Engelberg, hosted this literary evening at his residence in London. The evening featured two British crime writers, Ruth Dugdall and Daniel Pembrey who have published novels set in Luxembourg; both authors have spent some time in Luxembourg and know the country well. Among the 50 or so guests was His Royal Highness Prince Louis of Luxembourg in the centre of the group photograph with Ruth Dugdall next to him and Daniel Pembrey on the left of the photograph. 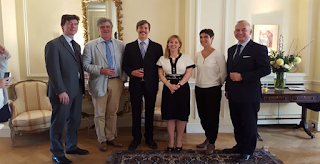 Both speakers were introduced by Professor Rene Weis, a Luxembourger who is now Professor of English at University College London and has written a number of non-fiction works.

Ruth won the Crime Writers Association Debut Dagger with her first novel, which featured, as have her later novels, probation officer Cate Austin. Her latest novel, Nowhere Girl, is reviewed at www.promotingcrime.blogspot.co.uk/2016/05/nowhere-girl-by-ruth-dugdall.html

Daniel worked in Luxembourg for a year and has set a novella published as an ebook in Luxembourg. He has a forthcoming series set in Amsterdam; the first title will be published by No Exit Press this year and is called The Harbour Master. Daniel’s account of the Eric Ambler evening held in the British Library, ‘Eric Ambler’s Fine Body of Work’ is reported in the June issue of Mystery People at p.6. Both writers suggested that Luxembourg which is at the heart of the European Union was, for all its outward benign appearance, an excellent location of crime novels and perhaps could inspire a new Noir genre – Lux Noir!

After the speeches drinks – particularly sparkling pink wine - and delicious canapes outside in the lovely early evening sunshine. In addition to other guests I met Mike Linane whose new publishing firm, Williams and
Whiting, has issued new editions of Mystery People contributor’s Penny Wanawake novels.

The photograph and some of the information in this article are taken from a press release issued by the
Luxembourg Embassy www.chronicle.lu/categoriescultureliterature/item/1705-crime-authors-address-luxembourg-ambassador-and-prince-louis-in-london?fb­­_ref=Default