‘The House of Eyes’ by Kate Ellis 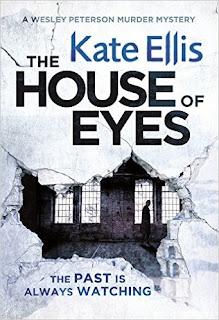 When Darren Hatman, known to the police and not in a good way, reports his daughter Leanne as missing he gets a relatively luke-warm reception.   Leanne at nineteen fancies herself as a model and has been keen to shake off her native Devon for the excitement of London for a long time.  But Darren insists that Leanne for all her faults would not forget her mother’s birthday - adding, ‘and that ‘bloody photograph’ has been stalking her’ which immediately gets DI Wesley’s attention.

As Wesley begins investigation into the whereabouts of Leanne, the narrative is interspersed with the diary of Richard D’Arles in 1786. And his journal doesn’t make for comfortable reading. Despite the marvellous sights of Venice and Florence Richard is disturbed by one of his travelling companions. Not the Reverend Micah Joules, who is studying the art of the masters, but his cousin Uriah who pursues more dubious activities.

As the story progresses we learn that Leanne works at Eyecliffe Castle, once home to the wealthy D'Arles family and now converted into a luxury hotel.

The discovery of a body changes Wesley opinion, as to the importance of finding Leanne.  Wesley's friend, archaeologist Neil Watson, has recently returned from a Sicilian excavation, where he made a disturbing discovery connected to Eyecliffe Castle. He surprises Wesley with the news that, while in Sicily, he met Leanne's alleged stalker.

Kate Ellis has again produced a winner, as a current day murder weaves together past and present. And, not just the past of 1756. As Wesley delves deeper he discovers that Eyecliffe Castle could have a connection with the disappearance of two girls back in the 1950s.

Two intriguing mysteries woven across centuries make for riveting reading. And then for the many fans of this series add the personal traumas of both our much loved DCI Gerry Hoffernan, who is dealing with his own
demons, and a new monster that suddenly manifests itself for DI Wesley Peterson. In all a wonderful entry in this highly acclaimed series, you cannot miss this.
------
Reviewer: Lizzie Hayes 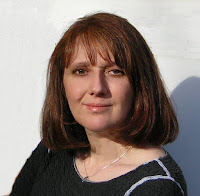 Kate Ellis was born in Liverpool and she studied drama in Manchester. She worked in teaching, marketing and accountancy before first enjoying writing success as a winner of the North West Playwrights competition. Crime and mystery stories have always fascinated her, as have medieval history and archaeology which she likes to incorporate in her books. She is married with two grown up sons and she lives in North Cheshire, England, with her husband.
Kate's novels feature archaeology graduate Detective Sergeant Wesley Peterson who fights crime in the "mean streets" (or should it be "mean lanes"?) of South Devon.  Each story combines an intriguing contemporary murder mystery with a parallel historical case. She has also written five books in the spooky Joe Plantagenet series set up in North Yorkshire as well as many short stories for crime fiction anthologies and magazines. Kate was elected a member of The Detection Club in 2014. She is a member of the Crime Writers Association and Murder Squad. Kate is currently working on her twenty first Wesley Peterson novel.
Visit her at www.kateellis.co.uk
Posted by Lizzie at 12:13