‘The Salt Marsh’ by Clare Carson 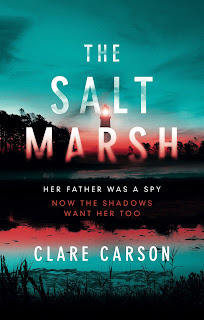 Jim Coyle was an undercover policeman for the Metropolitan Police. Or something. In that shadowy world he inhabited his family were never sure exactly what he did or where he was or what he was doing in his frequent unexplained absences. It undermined his marriage. And sometimes his work impinged directly on members of his family as when, in 1978, he took his 11-year-old daughter Sam to a spring fair and while his back is turned a strange man speaks to Sam with a warning, incomprehensible but sinister and  tries to stop her from following her father. Jim is angry and upset but refuses to explain.

In 1984 he is shot dead in London, near Vauxhall Bridge, his death covered up, and Sam is traumatised by this and cannot recover despite weekly telephone counselling sessions. She feels that she is under constant surveillance and cannot escape that nor yet the demons which, waking and sleeping, plague her. Sam’s mother, however, appear to be much less affected by Jim’s death and has a new man in her life; Sam feels that she is the only one truly grieving for Jim. On her way to Dungeness where she plans to meet her boyfriend, like her a political activist, Luke, Sam visits Jim’s grave and leaves one of his surveillance diaries on his grave; then changes her mind, returns to collect the diary, and finds it still there. But someone has been looking at it. And when she gets to Dungeness Luke isn’t there. And he never does turn up. What has happened to him?

An old colleague of her father’s warns her that, because of her being involved with a planned demonstration against the Dungeness nuclear power station, a secret service file has been opened on her which could result in her being classified as a terrorist. More and more, as Sam searches for Luke, a morass of incomprehensible menace envelopes her.

This first novel is a highly assured debut. Recommended.
------
Reviewer: Radmila May.

Clare Carson is an anthropologist who has worked for many years in international development. She lived in rural Zimbabwe when she was doing fieldwork for her PhD and has also lived and worked in the United States. She now lives on the south coast of England with her husband and two daughters. Her first book, Orkney Twilight, is a thriller about a daughter who wants to find out about her father’s life as an undercover cop.