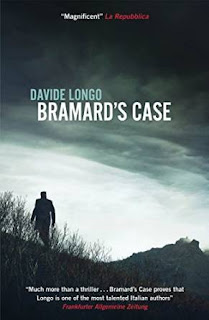 This story is set in Italy in the mountainous wooded country between Italy and France. Corso Bramard was once a commissario of police, but resigned from the force 15 years ago after a serial killer he was hunting murdered his French-born wife Michelle and took their daughter Michelle. The killer has never been caught but since then someone has been sending Corso mocking letters from different parts of the world. The letters have no trace of anything that could constitute any sort of evidence, not even fingerprints or DNA until, with the last letter, a single hair is discovered. DNA analysis establishes that it came from the killer’s first victim who had been mutilated but not killed whereas all the later victims had been killed. Although no longer a policeman, but a teacher, Corso is on sufficiently good terms with his former colleague, Commissario Arcodipane, to ask for help which arrives in the form of the young police graduate Isa Mancini who has considerable detecting abilities which only just outweigh her difficult and confrontational attitude with her colleagues and members of the public. But even when she and Corso work together, the search for the killer seems impossible. But there is also another protagonist in the story, the rich and multi-travelled Jean-Claude Montrecelli whom we also follow. He is a clever and manipulative man who delights in tantalising his pursuers and whose motives the reader begins to unravel.

Where I thought this book succeeded most was in the depiction of the harsh and rugged landscape and the dour, taciturn people who inhabit it. The plot was I felt overlain by a mass of detail not all of which seemed to be relevant. However that may be because the author, who has been hailed as one of the most talented Italian writers, is part of a different literary tradition to that of Britain and the USA. Anyhow, an interesting and a challenging read.
------
Reviewer: Radmila May

Davide Longo is an author, editor, and writing professor from Carmagnola. He has written articles for numerous magazines and newspapers, and several novels that have been published around the world, including two that have been translated into English: The Last Man Standing and Bramard's Case. Longo lives and teaches in Turin, not far from where he was raised.