‘The Promise’ by Robert Crais 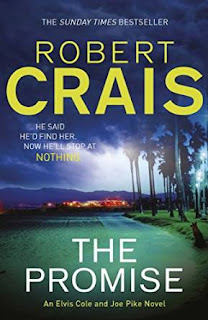 Los Angeles private eye Elvis Cole is hired by Meryl Lawrence to find her friend and colleague Amy Breslyn. Both women work for a business manufacturing fuels for the U.S. Department of Defense. Their work is classified ie Top Secret which is why Meryl insists that the arrangement between her and Elvis remain totally confidential. She will not even permit Elvis to come to her own apartment; instead they meet in a series of anonymous carparks. The reason for her concern is that after Amy, a single mother, had lost her only child Jacob, a journalist, in a terrorist outrage in Nigeria she withdrew into a shell and Meryl, anxious to help her friend in her agonising but silent grief, had persuaded her to meet someone via an online dating site. Now Amy has disappeared and with her a large sum of money from the department where she worked. Meryl cannot, for security reasons, give Elvis more details about Amy’s work nor will she provide even the name of the apparent new man in Amy’s life although she tells Elvis that whatever Amy has done he put her up to it. All she can provide is the name and address of a friend of Jacob’s, one Tom Lerner whom she feels sure will know more about Amy than anyone else. But when Elvis gets to the house there is no answer to his knock so he decides to wait. Then the police turn up in force pursuing a homicide suspect (a young Mexican male) at the address. When Elvis sees a man leaving the house in a furtive manner he gives chase he gives chase but the police intervene saying that man is not the man they want. There is a heavy police presence and everyone in the houses roundabout is being evacuated. Outside Lerner’s house is a vehicle with the words BOMB SQUAD on the side.

The narrative switches to one of the police officers, Officer K-9 (‘canine’!) Scott James, who, with his dog Maggie, is pursuing the homicide suspect. He speaks first of all to the apparent occupier, a white middle-aged Anglo, clearly not the suspect and who denies having seen anyone of that description. But Maggie is very highly trained and it is obvious that the suspect’s scent does lead after all to the house. When Scott gains access he sees that the young Mexican is there and is dead from a vicious head wound. More than that, alerted by Maggie who is specially trained for these purposes, the house is stuffed full of explosives. Police suspicion switches to the man Elvis saw leaving the house but Elvis, restricted by the promise of confidentiality made to Meryl, says that he was looking for Lerner in order to ask him for collaboration on a literary project. Unsurprisingly, the police appear unconvinced: they let him go but surely he will have more questions to answer.

Now the narrative switches to the man, ‘Mr Rollins’, whom Elvis saw leaving the house. He has killed the young Mexican because the police are on to him and he is a danger to Rollins and his schemes. But the only person who can tie him to the house is Scott James and his dog. So Scott must be eliminated. And so must the dog. Meanwhile Meryl is insistent that Elvis keep his promise and find Amy while the police, uncertain of his motives, are watching him closely. Elvis needs the help of his partner Joe Pike and his associate Jon Stone to find the truth about Amy and about the web of lies which has been woven round her.

Robert Crais has written a number of novels featuring Elvis Cole in the American private tradition of which he is one of the best. As can be seen from the outline of the first few chapters the pace is fast-moving and complicated. These in particular which are parallel accounts of the same events need to be read with great attention. But the book as a whole is highly satisfying. Recommended.
------
Reviewer: Radmila May 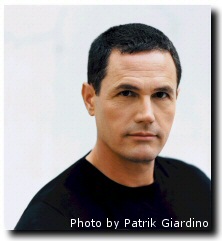