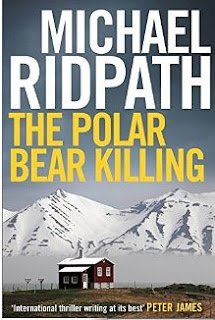 Michael Ridpath has written four books set in Iceland featuring
Sergeant Magnus (Jonson) Ragnarsson.  It was with delight that I discovered that his latest book The Polar Bear Killing features Detective Vigdίs Audardtt who has assisted Magnus in his recent investigations. Vigdίs is an interesting character, single but weighed down with the responsibility of trying to keep her alcoholic mother Audur off the booze.  Following  a physical altercation with her boyfriend, Audur is now in prison for two months.

So Vigdίs is travelling from Reykjavίk to Raufarhofn in the north –east of the country to assist in the investigation into the murder of a local policeman.  She reports to Inspector Olafur who greets her with the words ‘Wasted your time, Vigdίs’.

It appears that Olafur has arrested two animal-rights activists, Alex Einarsson, and Martin Fiedle, a German citizen, who while protesting their innocence of the shooting of Constable Halldόr state that ‘he deserved to die for shooting a polar bear’.   The community is divided between those who hail Halldόr as a hero for shooting an animal who could be dangerous, and those who believe the bear should be protected.

Vigdίs is surprised to find that although Olafur has arrested the two animal-rights activists, he has no evidence but is quite complacent it must be the foreigners.  As the interrogation progresses Vigdίs becomes less and less certain that these are the killers.  So Vigdίs, against Olafur wishes starts to delve more deeply into the case. She talks with Halldόr’s daughter Gudrύn who was angry with her father for shooting the bear.  When she interviews old farmer Egill, he says’ well, well, a blue policeman’.   Vigdίs is Iceland’s only black cop, but to the Icelanders ‘blue’ As with all Michaels books whether they be his financial thrillers which number eight, or his WW2 series I always learn new things.

Away from home, and lonely Vigdίs acts foolishly, and is pleased to see Magnus when he arrives unexpectedly. Together they work the case to uncover the killer, but will all be well for Vigdίs?

A most enjoyable whodunit in an interesting and atmospheric setting. Although a short novel, only 68 pages, the story moves along a good pace, and I was pleased to see development in Vigdίs character.  I look forward to the next instalment in this series.