‘A Masterpiece of Corruption’ by L C Tyler 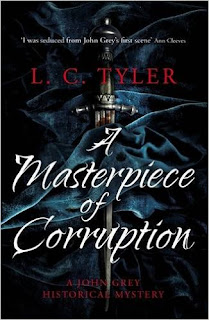 It is the winter of 1657. Lawyer John Grey receives a rather mysterious letter at his lodgings in Lincoln’s inn. He is perplexed because the letter is not addressed to him but signed by Mr S K and begs his presence at Gray’s Inn, in the spirit of friendship.  John Grey suspects who Mr S K maybe, and that the letter is the result of his meddling mother. He decides to visit Mr S K and nip any relationship in the bud.

And so John Gray ventures out into the cold snowy December night, but all does not go as planned, as the letter was intended for someone else entirely, and John Gray finds himself in the middle of a plot to assassinate the Lord Protector.  That John Grey is not a royalist is something he needs to keep to himself, and so unwittingly he finds
himself in the role of double agent. Discretion is therefore of the essence, and if he can keep his head, prevent a murder and keep both camps happy, he may actually keep his head.

However the arrival of Aminta Clifford posing as his cousin does nothing to allay his fears. She announces that she will be staying for some weeks and has placed herself under his protection.  She is not known for her discretion.

Meanwhile, with both the Sealed Knot and Cromwell's Secretary of State, John Thurloe, believing he is on their side, he is treading a fine line, and becomes very inventive when challenged as to his progress with the assassination.

Assuming many aliases’s and trying to keep himself alive, Gray finds himself in many unsought locations, and not all to his liking.  Several persons come to his aid but all have a little job he can do for them, and every little job  lands him deeper in the do do.

A masterpiece of penmanship. Entertaining,  enjoyable and quite brilliant. Be you a Royalist or a Cromwellian , you will find this a riveting read. Highly recommended.
------
Reviewer: Lizzie Hayes