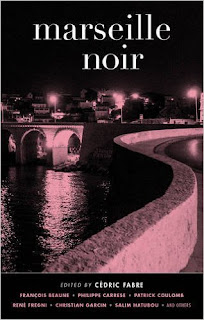 This volume of 14 short stories is one of a series of noir collections published by the U.S. Publisher Akashic Books, the majority of which are set in various U.S. cities although there are volumes set in, for instance, Delhi, Tel Aviv and Moscow as well as Paris. In the introduction to the stories the editor describes Marseille as a 'world city, a crossroads for the people of Europe and the Mediterranean' although now struggling to come to terms with post-industrial decline from its once proud position as 'the queen of the Mediterranean, tirelessly drawing its power from the vast French colonial empire.' The city has always been known for its criminality, including such films as The French Connection, and the connection between organised crime and politics dating back to the German occupation of the city in World War II. Now, however, the violence is often more random and disorganised, stemming from the drugs trade and the killings it gives rise to, and this is reflected in a number of the stories. But not all of them; one, for instance, arises from the sheer annoyance caused to a mild-mannered teacher by the constant playing by his neighbours of loud music, while another is a tale of revenge against a faithless lover. The stories are set in different areas of the city, indicating the individual character of each neighbourhood while at the same time also reflecting the city's homogeneity while also giving a voice to the many ethnic groups which make up the city's population from diverse parts of the world even so far as the Comoros Islands in the Indian Ocean, once a French colony but now independent. In that way, as the editor points out in the introduction, it resembles London although, being noir, there is not much room for humour – no equivalent of the 'lovable Cockney geezer' such as Arthur Daley from the 80s TV series Minder or Charles Dickens's child criminal, the Artful Dodger. But that isn't what noir fiction is about.

Cédric Fabre was born in 1968 in Saint-Louis, Senegal, and moved to France at age fourteen. A freelance journalist who runs writing workshops, Fabre’s novels flirt with alternate history (La commune des minots), fantasy, and noir (Marseille’s burning). He lives and works in Marseille.