Eric Ambler – an appreciation
by Radmila May 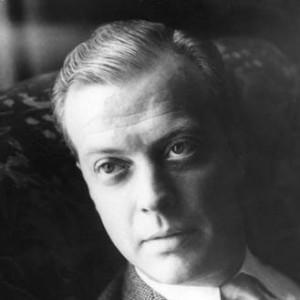 Eric Ambler (1909-1998) was the author of many thrillers and spy stories (18 altogether), screenplays (17) and short stories and non-fiction works. Although by the first part of the twentieth century, the thriller/spy story as a genre was well-established, with writers such as John Buchan, Sapper, and E. Phillips Oppenheim producing novels that ranged from an unthinking patriotism to downright racist, anti-Semitic crypto-fascism, Ambler is credited with having brought a new, intelligent realism to the genre which influenced many later writers of great standing such as Graham Greene, John Le Carre and Len Deighton.

Ambler began writing in 1936, when he was working a copywriter, having abandoned a career in engineering. At that time very much on the left of politics, his political views influenced his earlier novels. In addition he was impatient with the clichéd characters that populated most thrillers/spy stories of the day, described by Ambler himself as ‘the black-velveted seductress, the British secret service numbskull hero, the omnipotent spymaster’. 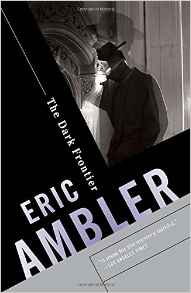 His first novel, The Dark Frontier, was intended as a parody of the genre; the five that followed, Uncommon Danger, Epitaph for a Spy, Cause for Alarm, and Journey into Fear, were published before the outbreak of World War II. Likewise, although he was an admirer of Somerset Maughan’s Ashenden stories with their hard-bitten, world-weary secret service agents, Ambler’s protagonists were ordinary men, such as freelance engineers, journalists, writers, not heroic by nature and sometimes rendered even more vulnerable by being to a greater or lesser degree stateless, who find themselves in a desperate predicament in a Europe about to be engulfed in the most savage war in history and have to find that unexpected core of resolution within themselves to escape that predicament and perhaps avert disaster to others. The novels are one-offs with a different protagonist in each; although the characters in some novels do reappear in others (such as Colonel Haki in The Mask of Dimitrios and Journey into Fear; the academic/crime writer Charles Latimer in The Mask of Dimitrios and The Intercom Conspiracy: Arthur Abdel Simpson in The Light of Day and Dirty Story), he did not venture a series. 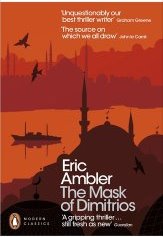 Of those six pre-war novels, The Mask of Dimitrios is generally held to be the most important; in this book the crime writer Charles Latimer is intrigued to be told that the body of a notorious gangster, Dimitrious Makrapoulos, is in a morgue in Istanbul. He decides to research Dimitrious’s career which takes him to various places in the Balkans and then to Paris where he makes a surprising discovery and finds that his own life is in peril. It has been suggested by the on-line Los Angeles crime fiction commentator, Sarah Weinman, that the fact that Latimer is himself a crime writer who researches the life of a real criminal and finds out that real-life crime is far different to his own carefully-crafted plots gives a post-modern tweak to the book and some of his later novels could also be described as post-modernist.

All Ambler’s earlier novels were informed by his political views at the time he wrote: the Soviet Union was largely benign, and the Soviet agents who feature in the stories were on the side of right. The villains are often at the head of large rather sinister capitalist organisations who are quite happy with the concept of regime change if it would benefit their financial aims and are prepared to recruit sinister and violent assassins to that end. However, he was deeply disillusioned by the Nazi-Soviet Pact in 1939 and thereafter became largely disinterested in politics, and his cynicism about politics informed his later books although his distrust of corporations continued. During the war he joined the army and was drafted into the army film unit; after the war he worked as a screen writer and producer for Ealing Studios, writing, for instance, the screenplays for The Cruel Sea, The Card and A Night to Remember.

He did not return to writing novels until the 1950s when, in Judgment on Deltchev, he tackled the subject of Stalin’s show trials. This was met with anger by some of his former associates on the left who thought he had betrayed his former ideals; however, personal gain and the manipulations of international corporations are equally important as levers of the plot as the horrors of Stalin’s regime. His post-War novels are more complex in structure than the earlier ones: in Judgment on Deltchev and The Schirmer Inheritance there are lengthy historical introductions which are, in essence, the backstory, which can be a problem for any writer. Too much, and the narrative loses its drive; too little, and the reader may be left at sea. More recent writers might dispense with backstories or introduce them piecemeal into the narrative; on the other hand, their presence means the reader doesn’t have to search the internet to find out the facts behind the backstory as I have had to once or twice when reviewing books. 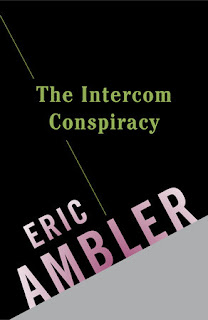 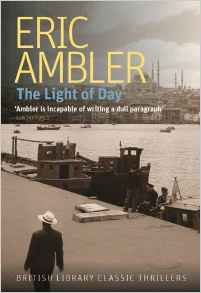 Some of the other novels have interlocking narratives: Passage of Arms, The Intercom Conspiracy and The Levanter are examples. And in The Light of Day Ambler introduced a new type of accidental hero, the petty criminal who is, like the basically honest but naïve and inexperienced heroes of the earlier books, drawn over his head into a mire of intrigue and intrigue. These later novels, although critically well received, were less popular with the public than his earlier ones; Ambler had been outflanked on one side by the tawdry glamour of the James Bond novels, and on the other by writers like Le Carre, with his knowledge of how the secret services actually worked, and Len Deighton with his feeling for how society had changed in the 60s, the 70s and later. And it became apparent to me while preparing this appreciation that in his novels he did not take into account the changing role of women who are mostly peripheral to his plots. This may surprise men, but if women are excluded or marginalised in stories they may feel that they need not bother to read them! There have been some titles by male writers in recent years with women protagonists, notably Le Carre’s The Little Drummer Girl, Sebastian Faulk’s Charlotte Grey and William Boyd’s Restless, but so far as I know, none by women (I wonder why not) apart from the genre of romantic suspense/thrillers especially those of Mary Stewart but that genre has all but disappeared in the U.K. (although not in the U.S.) although there are signs of a revival in this country – but the titles are certainly not read by most men! So go on, women crime writers – take up the challenge and write a spy thriller with a woman at its heart which is both exciting and at least moderately intelligent! 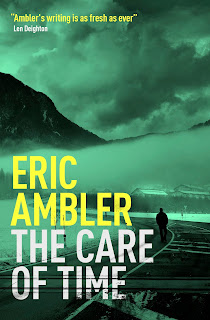 Ambler’s last book, The Care of Time which had a plot based on terrorism, was published in 1981 and, although he lived for another 17 years, he wrote no more novels. However, he did produce an autobiography, Here Lies (typically Amblerian in its ambiguity), and fragments of another, The Story so Far.
Although he was looked on as the originator of intelligent, ‘grown-up’ thriller and spy fiction and his reputation continued high among later writers of such fiction, by the time of his death they were all out of print. However, in 2009 on the centenary of his birth, a number of articles were published to celebrate his talent, including articles in The Guardian (Thomas Jones), The Daily Telegraph (Jake Kerridge), The New Statesman (Robert Hanks) and The Los Angeles Times (Sarah Weinman – the only woman among the many commentators which I have been able to find). Mike Ripley and Len Deighton added comments to an online summary of all his writing by Ethan Iverson, Come out of the Darkness into the Light of Day (which was extremely useful when writing this  appreciation!).