‘The Red House’ by Emily Winslow 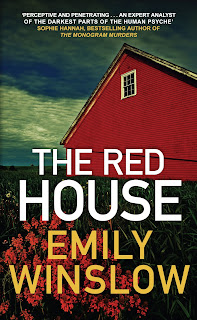 Maxwell Gant and Imogen Wright-Llewellyn are engaged and planning a wedding in the chapel of the Cambridge college where Maxwell has been offered a job as music tutor. But there is one difficulty: Imogen’s parents were killed in a car crash when she was eight and she and her two elder brothers and her younger brother were all adopted by different families. She has traced and made contact with her older brothers but has not managed to find the younger brother Sebastian despite her strenuous efforts. Throughout her life she has been fearful that she might encounter Sebastian and, not knowing who he was, fall in love with him, even marry him. Since Maxwell is younger than Imogen, could he be Sebastian? He assures her that he knows all about his family: his father deserted his mother leaving her with the baby and she and her own mother brought Maxwell up. So Imogen insists on DNA tests for them both and when the results are negative there is nothing to stop the wedding.

Imogen, however, is still obsessed with her search for Sebastian and is overjoyed when there is a response from someone calling himself Patrick Bell who claims to be Sebastian. She arranges to meet Patrick Bell at a place where their birth family had lived - the Red House in a Cambridge suburb - and asks Maxwell to go with her. He refuses on the grounds that he has an appointment with his future colleagues at the college where he is to teach. Then, concerned that Imogen may be putting herself in danger, he decides to go the Red House. He hears gunshots and a woman screaming. Alarmed, he bursts into the Red House, in fact not much more than a barn, and finds someone there – not Imogen, a much younger girl. That girl is Dora Keene, daughter of Detective Chief Inspector Morris Keene, who has gone to the Red House to search for her friend Fiona. Fiona isn’t there but Dora finds the body of Fiona’s grandmother Rowena. And when Maxwell bursts into the barn there is not just Rowena’s body but also that of a man unknown to either of them. Keene’s junior, Detective Inspector Chloe Frohmann, arrives at the Red House. Then Keene himself, although currently on leave with physical and psychological injuries from a previous investigation, is called in and a complicated and ultimately tragic web of family relationships and obsessions comes to light.
This is an interesting literary novel which will appeal to those who appreciate the darker side of human relations.
------
Reviewer: Radmila May

Emily Winslow is an American writer who in 2006 moved to Cambridge, England, with her British husband and two little boys. Falling in love with Cambridge, its gorgeousness and quirkiness and way the University orgeousness and quirkiness and way the University permeates the city, Emily’s first book began as her attempt to describe it The Whole World was published in 2010.