‘Artefact’ by Gigi Pandian
Published by The Henery Press, 2013.
ISBN (trade pb): 978-1-938383-68-7
‘Pirate Vishnu’ by Gigi Pandian
Published by The Henery Press, 2013.
ISBN (trade pb): 978-1-938383-97-7
Dr Jaya Jones who narrates the story in both these novels is a young history professor at Berkeley University, San Francisco, California. Her hippy father whom she sees little of is American; her mother, now dead, was a Tamil from South India. It was that which influenced Jaya in the direction that her studies took; her subject is the history of the East India Company which preceded the absorption of South Asia into the British Empire. Another instance of Jaya’s interest in her South Asian heritage is her love of bhangra music – a fusion of traditional Indian music and Western rock – which she plays in clubs with her friend Sanjay, he on the sitar, she on the tabla (small drums). Sanjay also works as a magician. 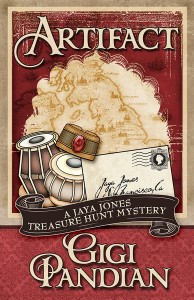 In Artefact the story begins when Jaya is distressed to read in a newspaper that a young English archaeologist, Rupert Chadwick, and a former lover, has been killed in a road accident on a winding coastal road in Scotland. Almost simultaneously, Jaya receives a parcel addressed to her in Rupert’s handwriting. In the parcel is a heavy gold anklet with a large ruby and tucked away in the wrapping is a note from Rupert saying that he is sending the ruby to her for safekeeping, that someone is on to it, that she is the only person he can trust, and asking her to call him. This she cannot do; after all, he is dead and Jaya is beginning to suspect murder. She recognises that the anklet is old and of Indian workmanship. She consults Lane Peters, an art historian, who says that it is in fact a bracelet and is indeed old and would have formed part of a priceless collection. He is clearly intrigued and would like to do further research. Jaya, however, has established not only where Rupert was staying but that he was taking part in an archaeological excavation of a Pictish site in Scotland and she determines to set off there and investigate the circumstances of Rupert’s death, and of the rest of the collection. However, she finds that Lane is bent on the same quest. Her travels take her first to London where she becomes aware that she is being followed and then to Scotland. There she and Lane eventually unravel the true story of the collection and the mystery of what happened to Rupert, a search which lands them both in peril and calls into question the motives of all the people involved in the excavation. 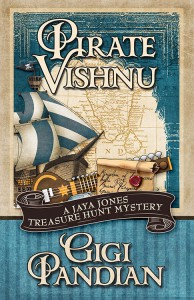 Pirate Vishnu concerns one of Jaya’s ancestors, her great-great-uncle, Anand Paravar, who had emigrated from what is now Kerala in Southern India to California and was killed trying to save the life of his friend in the great earthquake of 1906. The story begins when Jaya is consulted by a retired lawyer, Steven Healy, about a map of San Francisco he has found showing the whereabouts of a treasure. He tells Jaya that the treasure is one that her ancestor, Anand Paravar, stole from his ancestor, and that so far from dying a hero’s death Anand had been killed over the treasure. When Jaya tells Healy that Anand wrote letters to her great-grandfather back in India and if there had been references in the letters to a treasure the family would have known, Healy insists that he must see the letters so that they will lead him to the treasure. But that night he is murdered. And Jaya finds evidence that Uncle Anand was also known as Pirate Vishnu; if that is so that could explain how he came to possess the treasure. Then Healy’s son Connor accuses Jaya of being involved in his father’s death, and although the police do not think she was she resolves in order to settle all doubts she will go to the city of Kochi (Cochin) in Kerala and find out the truth for herself. She is accompanied by the art historian Lane Peters and while it is clear that his feelings for her match her feelings for him he is reluctant to become more involved for reasons which he will not disclose. And Sanjay too travels to Kochi. Although they do discover more clues in India the mystery is not unravelled until all three return to San Francisco. And throughout the narrative there is a parallel narrative in which we learn of Anand’s time in San Francisco and the true story of his life and death.


Like many crime fiction readers I was a great fan of Elizabeth Peters and her many novels such as her long series about Amelia Peabody and her Egyptologist husband Radcliffe Emerson, her shorter series about the historian Vicky Bliss and the sardonic librarian Jacqueline Kirby, not to mention a number of one-offs, all equally enjoyable yet clearly founded on a considerable knowledge of history. So it is good to see a new series which combines suspenseful and exciting stories told with lightness of touch yet at the same time substantial scholarship. Recommended.
------
Reviewer: Radmila May 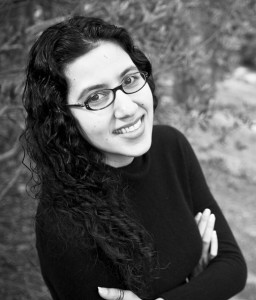 Gigi Pandian is the USA Today bestselling author of the Jaya Jones Treasure Hunt mystery series (Artifact, Pirate Vishnu, and Quicksand) and the Accidental Alchemist mysteries (The Accidental Alchemist and The Masquerading Magician). Gigi’s debut mystery novel, Artifact, was awarded a Malice Domestic Grant and named a “Best of 2012” Debut Novel by Suspense Magazine. The follow-up, Pirate Vishnu, was awarded the Left Coast Crime Rose Award, and her short fiction has been shortlisted for Agatha and Macavity awards. Gigi spent her childhood being dragged around the world by her cultural anthropologist parents, and now lives in the San Francisco Bay Area.