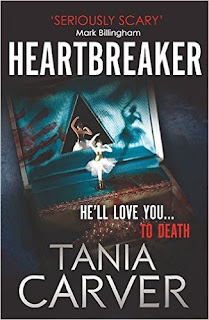 Heartbreaker comes with several “scary warnings” on the cover.  They are well deserved.

Detective Inspector Phil Brennan of the West Midlands Major Incident Squad in Birmingham is called to a crime scene where the body of a woman has been dumped in a canal.  Subsequent examination reveals that she has been burnt and cut prior to death and that her heart has been removed.  She is identified as Gemma Adderley, a victim of domestic abuse who, having found the courage to leave her husband for a women’s refuge, is then abducted in the car that she believes will take her to safety.  Gemma had taken her seven-year-old daughter, Carly, with her.

Some students find Carly.  She is severely traumatized, so a psychologist, Marina Esposito, is called in to help with the case.  Marina is DI Phil Brennan’s wife.

There is a slight problem.  Marina has left Phil and taken their young daughter with her.  It isn’t that she doesn’t love Phil anymore, she does.  It’s just that there is a crazed woman psychopath out to damage/kill both Marina and Phil and after their police protection was withdrawn Marina decided that Phil couldn’t keep them safe, so she left him. Phil is unhappy with this arrangement and so, if she is honest, is Marina. The troubled relationship between the two of them percolates through the book.

A second abused woman is killed and her heart removed.  As she was also relying on a safe car to take her to the same refuge that Gemma had been heading for, it becomes clear that the killer is targeting vulnerable women. The murderer is using his victims as surrogates for other women who have hurt him in the past. He believes that by killing them in a ritualistic way and removing their hearts as trophies, he will eventually be healed of his own hurt. Believe it or not, there are several possible contenders for the role of this deranged killer.


This is a story that moves along at a good pace. It has some very creepy characters; a lot of information about the feeling and attitudes of abused women; and an engaging married couple who, besides finding the killer, have an unusual problem of their own to resolve.  If you don’t mind looking over your shoulder when walking alone at night you should enjoy this book.
------
Reviewer Angela Crowther


Tania Craver is a pseudonym for Martyn Waites.  Martyn was born in Newcastle upon Tyne. After leaving school he did a number of jobs, eventually going to drama school in Birmingham where, three years later, he emerged as a professional actor.  After a variety of acting jobs he wrote some short stories. As the short stories got longer he figured he was ready to write a novel. The result was Mary's Prayer, a noirish crime novel featuring the flawed but interesting Stephen Larkin. It was published five years after he started it. The followed it a year came Little Triggers, again featuring Larkin, then Candleland and the Larkin trilogy was complete. Since then Martyn has written four novels featuring Joe Donovan. Four novels featuring Stephen Larkin, and several stand-alones.