‘The Troutbeck Testimony’ by Rebecca Tope 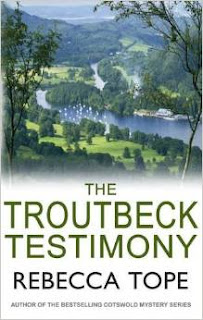 This is the fifth title in the series featuring 38-year old florist Persimmon ‘Simmy’ Brown set in Windermere in the English lakes. As in the author’s Cotswold mysteries, the protagonist is a woman who finds herself being drawn into investigating a murder, but, unlike the protagonist in that series, Simmy is a highly reluctant amateur detective who wishes nothing so much as to concentrate on running her shop with the help of her assistants Melanie and new assistant Bonnie Lawson and also young Ben Harkness who has a passionate interest in forensics . Simmy is very doubtful about Bonnie’s ability particularly since the girl has a history of anorexia but Bonnie turns out to have a real feeling for flowers and will clearly be an asset to Simmy’s business. However, trouble is brewing and Simmy hears from her father Russell, who with his wife Angie runs a bed-and-breakfast, successfully despite or perhaps because of their 1960s ‘hippy’ tendencies, that there has been an outbreak of ‘dog-napping’ in the locality. Russell and Angie are very much dog-lovers; Simmy is not but she is anxious on her parents’ behalf. Then a suspected dog-napper is found with his throat cut while at the same time Russell has received death threats. Simmy is naturally deeply concerned but it is necessary for her to put all her energies into running the shop particularly since they have just received a massive order for the funeral of local celebrity Barbara Hodge. But the police investigation into the death keeps intruding while Simmy’s relationship with bohemian local potter Ninian Tripp is problematic because, with his laid-back attitude to life, she cannot be sure how he feels about her.

The depiction of the beautiful Lake District scenery is part of the book’s charm as is the portrait of the tight-knit community of Troutbeck (Simmy as an ‘incomer’ is essentially an outsider) with its various eccentric characters. The author’s love of flowers and feeling for flower arrangements is manifest. Recommended particularly for readers who prefer their crime fiction to be of a traditional nature.
------
Reviewer: Radmila May

Rebecca Tope is the author of four popular murder mystery series, featuring Den Cooper, Devon police detective, Drew Slocombe, Undertaker, Thea Osborne, house sitter in the Cotswolds, and more recently Persimmon (Simmy) Brown, a florist. Rebecca grew up on farms, first in Cheshire then in Devon, and now lives in rural Herefordshire on a smallholding situated close to the beautiful Black Mountains. Besides "ghost writer" of the novels based on the ITV series Rosemary and Thyme. Rebecca is also the proprietor of a small press - Praxis Books. This was established in 1992
www.rebeccatope.com