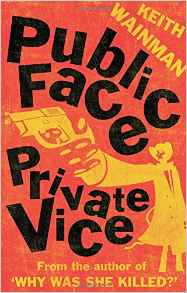 This book held my interest - and it is quite long!   It is a police procedural  but with a police team that is a collection of competent but often rather eccentric characters who had, as I understand it, been described thoroughly -  as a selection of misfits -  in a previous book.  I think I would have found it a little easier to distinguish the team members if I had read the previous adventure.  The chief Superintendent is Charlie Smith and the wisecracking between his team members is fun to hear except for a stylistic matter that I will mention later.

The story really rolls along as a prominent and profoundly unlikeable TV journalist is murdered.  He has powerful friends and the investigation into his death is threatened by their efforts to avoid interrogation and to hide their activities.  Gradually more is discovered and effects on the financial community discerned.  A major feature of the story is the way that these police get their results without giving fear or favour to anyone.

One comment on the way the book is written is that the failure to use many elisions (he'll, I'd etc.) and the reiterated he saids, which give a rather stilted air to much of the dialogue.

This is a thrilling and readable adventure which interested me enough to buy the previous volume!
------
Reviewer: Jennifer S. Palmer
------------------------
The first story about Chief Superintendent Charlie Smith and his unconventional team is Why Was She Killed?

Keith Wainman was born and brought up in Central London, one of seven children. He has worked in several jobs and has run his own business. He enjoys watching sport and keeping up with current affairs.