‘The Replacement’ by Patrick Redmond 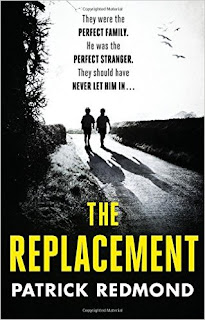 Twenty-seven years ago 3 boys were born to two different women in the same hospital. It was just after Christmas and the nursing staff were desperately busy. Two were twins, children of Robert and Caroline Randall, and named James and Thomas; the third was Stuart and his mother was Mary Godwin. Robert Randall is a successful and prosperous solicitor, Caroline is prominent in the local community, and they live with their two sons in a fine house in Oxfordshire. Mary Godwin and her husband lived in a much more modest way in Birmingham, and when both parents and his younger sister Samantha are killed in a car crash Stuart first lives with his uncle Gordon and aunt Eileen and their spoiled and malicious son Adam but when they reject him he has to go into care. But the reality of their dissimilar situations is rather different. Robert is arrogant at work, cordially disliked by his colleagues, unfaithful to his wife, and lacks any real affection for either of his sons. Caroline believes that her leading role in the local community makes her popular but in fact she is regarded as patronising by her friends. Worse still, James is very much her favourite; she never had maternal feelings towards Thomas who is largely ignored by her. James has followed his father into the legal profession and is successful but Robert makes his resentment at James’s success plain. Thomas is not so successful in his career as an accountant and resents his mother, his father (who has nothing but contempt for his less successful son), and James, however much James tries to make up for Robert’s contempt and Caroline’s neglect of Thomas. Meanwhile Stuart has become an estate agent in Southgate, an outer London suburb, and it is a chance encounter while showing a client round a flat that leads to the truth being uncovered: there was a mix-up at the hospital when the boys were born. One of the Randall twins was actually born to the Godwins and the Godwins’ son was actually one of the twins. The result is disastrous for the Randalls and erupts into violence.

I thought this book was actually very good. The characters are well-drawn and convincing and strongly differentiated while their inevitable progress towards the final catastrophe is compellingly depicted. Recommended.
------
Reviewer: Radmila May 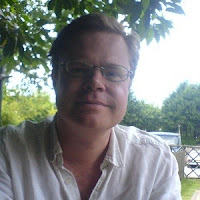 Patrick Redmond was born in Essex, England in 1966.  At nine Patrick was sent to boarding school.  But at  fifteen, after O levels, he went to live in Guernsey in the Channel Islands and found it wonderful to be back at a day school again and to have a social life outside school grounds. After school, and a year out spent doing a variety of jobs and some travelling Patrick went  to LeicesterUniversity to do a law degree.  Having graduated he spent a year at the University of British Columbia in Vancouver, studying for a Masters.  He spent ten years in total in London law firms, specialising in European and Commercial law . But kept on writing, in whatever spare time he could find.  Eventually he landed his first publishing deal which he says ‘will always rank as one of the most exciting of my life’. Patrick now lives in West London
http://www.patrickredmondbooks.com/