‘Heirs and Assigns' by Marjorie Eccles 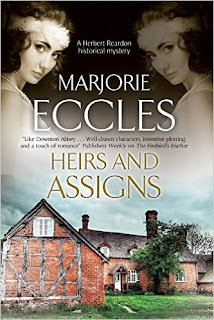 
Wealthy retired businessman Penrose Llewellyn has decided to throw a party at Bryn Glas, his country home in Shropshire, to celebrate his 60th birthday. He has news to impart to his nearest and dearest. And so his mixed bag of siblings, relations and some close friends gather for the supper party.  The surprise arrival is his younger brother Huwie. Known to be the black sheep of the family, his whereabouts been unknown to the family for many years.

The following morning Penrose Llewellyn is found dead in his bed.

With staff shortages the local police are unable to cope with a suspicious death and so Detective Inspector Herbert Reardon has to break the news to his wife Ellen that their trip to the Cotswolds is off. However, the locality of the death is where her friend Kate Ramsey lives and much to Reardon’s dismay Ellen thinks that she may plan her own trip.

As DI Reardon questions the family and friends, he meets with hostility and a distinct lack of cooperation. As with most families there are long buried secrets, and he begins to suspect that it is only by uncovering them that he will find the killer.   Despite much probing, he cannot get a handle on why Huwie became estranged from his family.

The story is set in November 1928, and the experiences and losses of the Great War still linger.  People are still adjusting and the feeling of great change is well-portrayed as the lives of the characters unfold.

Apart from greatly enjoying the books penned by Marjorie Eccles, I am also fascinated by this period in our history and can heartily recommend this book on two levels - that of good mystery and a look at life in the 1920’s.
------
Reviewer: Lizzie Hayes