‘Preserve the Dead’ by Brian McGilloway 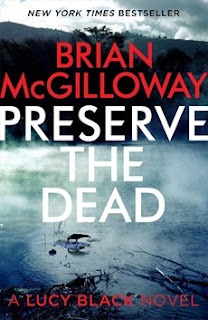 One hot July day in the city of Derry, Northern Ireland, the body of an elderly man is found floating in the River Foyle. Detective Sergeant Lucy Black of the Northern Ireland Police Service, who is off duty and visiting her father who is in a home and suffering from Alzheimer’s, is called to the scene. When the body is pulled from the water it is first assumed that he was a suicide. But not only was he dead when he went into the water, he has been embalmed. He is identified as Stuart Carlisle, a respectable local businessman who died recently of natural causes, and was intended to be cremated. This he clearly was not. But someone was although as a result of the cremation process the remains are unidentifiable except that there was a steel plate in the deceased’s skull and that seems to have been struck with a sharp implement. Like an axe. There is an unexplained time-gap between Carlisle’s funeral and the cremation. Was that when the substitution was made? Another body is found stuffed into a dustbin and intended for disposal as rubbish. The body is identified as that of Kamil Krawiec, a Polish builder and one of a group of homeless people who seek shelter in a derelict building now boarded up by the council preparatory to Derry’s year as City of Culture 2012. Most of the other homeless people, nearly all alcoholics, refuse to talk to the police apart from one young woman, Grace, who, although deeply hostile to authority, is sharp and noticing. Someone who might have helped is the voluntary worker, Terry Haynes, who has been working with the group. Among the people Terry has supported in the past is Lucy’s boss, Tom Fleming, a former alcoholic whose life Terry helped turn around. But now Terry is missing and Tom is deeply anxious. But at the same time, an elderly acquaintance of Lucy’s, Doreen Jeffries, has been burgled and she calls on Lucy for assistance. The most likely suspect is Helen, a young girl formerly in care and consequently coming within Lucy’s remit as part of the Public Protection Unit. But then it seems more likely that two men who repaired Doreen’s driveway were involved. And one of those men was Polish. Was he Kamil? The other man was Aaron Moore; he has now disappeared. And simultaneously, Lucy has become involved with Fiona, sister of a neighbour, who is being physically and psychologically abused by John Boyd, the council official responsible for boarding up the derelict building. And all this has to be dealt with by the Derry police; they cannot call on their colleagues in Belfast because the riot season, arising from the July 12 marches, is in full swing. So it is hardly surprising that relations between Lucy and her occasional lover are strained virtually to the point of non-existence.

This is a gripping and compelling story with a highly complex plot; only in the hands of an experienced practitioner such as this author can the various strands be coherently narrated and eventually brought together. Recommended.
------
Reviewer: Radmila May

Brian McGilloway was born in Derry, Northern Ireland, in 1974, and teaches English at St Columb's College, Derry. He lives near the Irish borderlands with his wife and their four children. He is the author of five previous crime novels: Little Girl Lost, The Rising, Bleed A River Deep, Gallows Lane and Borderlands.