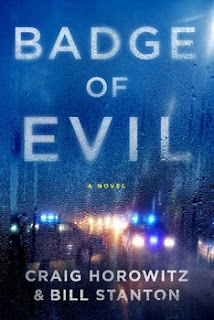 Lawrence Brock is not your average Police Commissioner – he likes to be in on the action and, when he takes part in a raid on a possible terrorist cell which leaves only one surviving suspect, he steps on the path to becoming a hero.  It is clear that Brock, with the backing of the New York mayor, is destined for great things and that, in pursuance of them, is prepared to do whatever is necessary to further and protect his career.

The suspect’s family cannot accept the accusations made against him and hire PI Frank Ross, to investigate further.  He teams up with AJ Ross, an investigative journalist, to find out what is going on and, as the plot unfolds, the duo find themselves facing ruthless opponents.  As they dig deeper, Frank and AJ have to decide who they can believe:  the first-rate cop, the hero police commissioner, the suspect’s mother or the rap star.

This is the first novel by these two authors and they have produced a central story that is fast-moving, tense and gripping.
------
Reviewer:  Jo Hesslewood

Craig Horowitz is a former award-winning journalist with New York magazine, where he was one of the city’s best-known reporters, covering City Hall, Rudy Giuliani, the NYPD, and 9/11. He has also reported extensively from the Middle East and served as a senior writer at People magazine. A guest lecturer at Columbia’s Graduate School of Journalism and NYU’s Graduate School of Journalism, as well as a regular commentator on television and radio, his writing has been featured in many anthologies, including The Best American Crime Writing 2005 (HarperCollins). He is currently a partner at Finsbury, a global strategic communications firm.

Bill Stanton is a recognized leader in the field of safety and security and a founding partner at QVerity. When his career as a decorated NYPD officer ended when he was injured in the line of duty, he moved into the private sector, where he specializes in executive protection and investigations. He was a safety and security contributor for both The Today Show and Good Morning America, and appears regularly on programs at FOX, CNN, Telemundo and other networks. He is the author of The Anti-Terror Checklist.