‘Death by Dangerous’ by Olly Jarvis 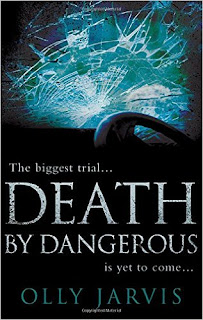 John Anderson is a barrister on the North West circuit, practising in the criminal courts. On the surface he is highly successful with a string of successful cases, mainly prosecutions, and the strong likelihood of being made Queen’s Counsel and subsequently progressing to a circuit judgeship, perhaps even the High Court bench. Beneath the surface, however, all is not well. The sharp decline in criminal legal aid means that his income has been sharply reduced. His marriage is unsatisfying: although he adores his two young sons the relationship with his wife is lacklustre. His father, a circuit judge, is cold and unloving, always critical of his son’s career, and his mother is so dominated by her husband that she is unable to show her son any love. John himself is hardworking and ambitious but also rather aloof and many of his Chambers colleagues are jealous of his success and his apparently glittering future.

Then disaster strikes. One evening, while partway through a trial in which he is prosecuting the Manchester gangster, Waqar Ahmed, while driving home, apparently falls asleep at the wheel and knocks down and injures a little girl, Molly Granger, who subsequently dies. Anderson himself is seriously injured and a young woman, identified only by her Manchester library card as Heena Butt, in the car with him is killed. Anderson has no recollection of the incident and not the faintest idea of who Heena Butt was, let alone how she came to be in the car. John is charged with causing death by dangerous driving. As a result he has to withdraw from the trial and is unable to practise as a barrister at all. His wife throws him out of the house. He is virtually penniless and has nowhere to live. He is shunned by his Chambers colleagues apart from the Head of Chambers, Orlando West. Then help comes from an unexpected quarter: Ahmed’s defence lawyer, the solicitor Tahir Hussain. He says that he does not believe that Anderson is guilty. Although previously Anderson has held Hussain in low esteem he does accept his help and they both, along with Hussain’s assistant, Adey Tuur, eventually unravel the complex web of deceit and betrayal that lies at the heart of the deaths of Molly and Heena.

What is deeply impressive about this story is the author’s experience of the world of criminal law. He is himself a practising barrister and his knowledge of the law and practice of the criminal law provides a foundation of great authenticity. It ranges from preliminary proceedings and informal discussions between lawyers and lawyers and the police through proceedings in magistrates’ courts and trials in the Crown Court up to a hearing in the Court of Appeal and the dramatic citation of a decision by the European Court of Human Rights at Strasbourg.
------
Reviewer: Radmila May

Olly Jarvis is a writer and criminal defence barrister, originally from London but now working in Manchester. Drawing on his experiences, he writes both fiction and non-fiction with a particular understanding of the pressures and excitement of life in the courtroom. He wrote highly acclaimed Radio 4 drama Judgement, exploring a barrister’s thought processes whilst cross-examining a rape victim.
ollyjarvis.co.uk