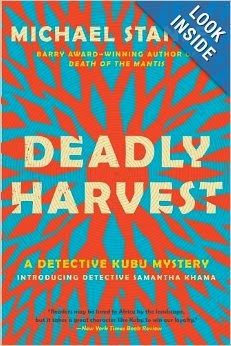 This is the fourth title of a series set in Botswana and featuring Detective Kubu and introducing a new character, Samantha Khama. Michael Stanley is actually a pseudonym for the two authors, Stanley Trollip and Michael Sears. The theme is the practice of muti, a traditional African medicine derived from plants, animals and at worst from human beings. Belief in muti is widespread in Botswana and reinforced by fear of those witch doctors who practice muti.

The story begins with the disappearance of a young girl. Investigation by the police is non-existent until Samantha Khama is given the case for her first detective assignment. Then another young girl disappears and her father, desperate with grief and police non-action and believing that she was abducted for sexual purposes by the rising young politician William Marumo, kills him and goes on the run. But a search of Marumo's house by a forensic team under the direction of Kubu reveals the presence of muti. Marumo's death is followed by the disappearance of the albino Mabulo Owido. The trail that Kubu and Samantha follow leads them through the bars and drinking dens of Botswana's capital Gaberone (I particularly liked the bar called Big Mama Knows All), encounters with witch doctors good and bad and corruption among the police and elsewhere to the eventual uncovering of the truth behind the disappearance of not just two but many young girls as well as that of Owido.

Deadly Harvest is the first in this series I have read. It is a truly impressive crime novel. The characters are complex and mature and Kubu in particular with his warm and happy family life and his compassionate and intuitive intelligence is especially attractive. I shall be searching out the earlier titles in the series and eagerly awaiting the next.
------
Reviewer: Radmila May
Previous books by Michael Stanley: A Carrion Death, The Second Death of Goodluck Tinubu, Death of the Mantis.

http://www.detectivekubu.com/
Posted by Lizzie at 15:49