‘Two for Sorrow’ By Nicola Upson 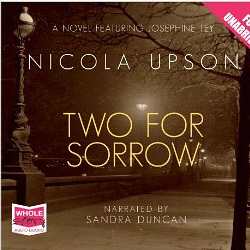 Narrated by Sandra Duncan
Published by Whole Story Audio Books,
July 2010.
ISBN: 978-1-40745-927-1
(13 CD’s Playing Time 14.75 hours).
Josephine Tey has travelled down to from her home in to do some work on her novel, a fiction account of a true crime - the hanging in Holloway in 1903 of Annie Walters and Amelia Sach - the Finchley baby farmers.
The  Cowdray Club where Josephine is staying is run by her old tutor Celia Bannerman. Josephine is keen to interview anyone who was around at the time of the hanging and Celia Bannerman proves to be a help in this instance having herself worked for a short time at Holloway prison.
Having also agreed to take part in a star-studded charity gala in aid of the Cowdray club Josephine meets up with the Motley sisters, who are the cousins of her friend Inspector Archie Penrose.  But when a young seamstress is found brutally murdered at the studio of the Motley sisters Josephine begins to suspect a link between the current death and the hanging thirty years earlier.
A fascinating insight into two era’s poles apart, depicting both the life of an independent woman who stays in a private women’s club when she visits London, against the stark reality of London slums in the early 1900’s and the bleakness of Holloway prison.
Once again I find that I am listening to a crime fiction book that I know is going to have me delving back into the history of this period when women got rid of children they couldn’t afford. A chilling aspect of life at the turn of the 19th to 20th century.
This is Nicola Upson’s third book featuring Josephine Tey and in this book, she has for me began to find her place in writing first class crime fiction.
The narration by Sandra Duncan brought much to my enjoyment. This audio is highly recommended.
-----
Lizzie Hayes

Nicola Upson was born in Bury St Edmunds, , and read English at , . She has worked in theatre and as a freelance journalist, and is the author of two non-fiction works, and the recipient of an Escalator Award from Arts Council England.
Since discovering the work of Golden Age author Josephine Tey/Gordon Daviot, she has developed a passion for the theatre and literature of the period, and an admiration for those who wrote and performed between the wars. Her research has included many conversations with people who remember the time and who knew Josephine Tey, including Sir John Gielgud and Margaret Harris, one of the design team ‘Motley‘.
She lives with her partner and splits her time between and , where the next novel in the series is set.
Photograph of Nicola courtesy of Julia Hedgecoe

Sandra Duncan is an award-winning actress with significant credits on television, radio and the theatre, where she is probably best known for her portrayal of Mrs Birling in An Inspector Calls in the , as well as performances in All My Sons by Arthur Miller and Who's Afraid of Virginia Woolf by Edward Albee. Her television credits include , Doctors, and Midsomer Murders.
Posted by Lizzie at 17:33