‘Dying For Justice’ by L.J. Sellers 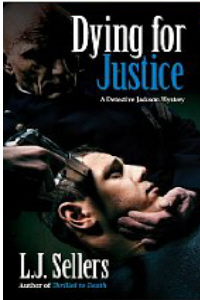 Published by Spellbinder Press, 2011.
ISBN 9780983213833
Gina Stahl, opens her eyes, but has no idea where she is, all that comes instantly into her mind is ‘someone tried to kill me’.
When she comes to full consciousness she discovers that she is in a long-term care facility and has been in a coma for two years, following her suicide attempt.  Although her brain is fuzzy Gina tells the police that she had not tried to commit suicide but that that she had been attacked by a man wearing a ski mask, and that she believes the man to be her ex-husband.  But, her ex-husband is a police officer, so who will believe her.
The case is assigned to Detective Wade Jackson, who works with the violent crimes unit of the Police Department.  DI Wade has an excellent record of closing cases, but DI Wade is distracted by a letter received from Hector Vargas, the man accused, convicted and jailed for the murder of his parents, eleven years ago.   Hector Vargas tells that he is innocent, and now that he is terminally ill with cancer he wants to set the record straight. Despite ’s skepticism he knows that he has to follow it up.
works both cases, but only manages it with the help of his 32-year-old trainee detective- Lara Evans.  Soon finds himself in the unenviable position of suspecting other police officers.  His re-opening and examining the circumstances surrounding his parents death brings him into contact with his brother with whom he has not seen for a number of years.
The story of both cases grips the reader, with the narrative alternating between Jackson and Lara Evans.  I could not put this book down - a fine piece of plotting that had me hooked, and turning the pages eager to know if, and how justice would be done for these two cold cases.
Highly recommended.
-----
Lizzie Hayes

L J Sellers She is the author of the bestselling Detective Jackson mysteries and standalone thrillers.  Also an award-winning journalist, capturing the Grand Neal in 2002 for her articles titled “Discovery! Neurology” and winning a second Neal in 2003 for her role on Pharmaceutical Executive, named “best overall magazine.” The Neals are the highest awards granted to trade magazines.
Posted by Lizzie at 09:59