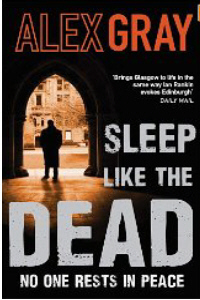 Published by Sphere,
22 December 2011.
ISBN: 978-0-7515-4379-7
The shooting of thirty-seven year-old Kenneth Scott divorced, no children living in a quiet suburb of Glasgow, seems motiveless – even the victim has a surprised look on his face.  And disbelief from those who knew him, ‘such an ordinary bloke’ seems to be the census of opinion - it must have been a mistake!
Investigating is Detective Chief Inspector William Lorimer’s team and his new Detective Constable Omar Adel Fathy.  And so they begin the interviews of those closest to Kenneth Scott with the exception of his ex-wife who they cannot locate.
Across the city, a hit-man is keen to collect his fee and be on his way. But matters don’t go smoothly and this makes him angry and bent on revenge.
Meanwhile in wee toerag Billy is living royally on 10K that isn’t his, but wee Billy is not that savey away from his native .
Further professional killings has DCI Lorimer struggling to find any evidence, and following budget cut-backs he cannot call on criminal psychologist Solomon Brightman, to give him a profile of the killer.  Although saddened that he is no longer able to be involved, Solomon and his wife Dr Rosie Ferguson, the forensic pathologist is pregnant with their first child, so they have much to occupy them, but Solomon is closer to the case than he knows.
An intriguing mystery, rich is characters that initially seem unrelated until the author skilfully draws the threads together and the story unfolds to reveal the full picture.  The strands of the story are satisfyingly tied-up, with a twist at the end that for this reader ejects into the story a note of sadness.  Very highly recommended.
------
Lizzie Hayes

Alex Gray, born in , is a Scottish crime writer. She has published six novels, all set around and featuring the character of Detective Chief Inspector Lorimer and his psychological profiler  Solomon Brightman. The earlier novels being published Canongate and later books by Little Brown. She has also written several magazine articles.