It is salutary for me to reflect that not only is this conference series well into its third decade since being one of the first, if not the first, of such conferences to be held in the U.K. but that I have been to all but one. One of the great attractions is, of course, the setting on the banks of the tree-fringed River Cherwell. Another is the pleasure of meeting old friends and acquaintances in such a lovely setting, not to mention the excellent food and drink (least said about the earliest years on that score the better; things are very different now).  But the greatest attraction of all is the scope of the topics under discussion. In this it differs from other Crime Fiction conferences in that a single over-arching concept forms the framework for the discussions which take place between panellists under the benign yet firm chairmanship of crime-writer Natasha Cooper.

This year the concept was Gamechangers: Writers Who Have Transformed the Genre. It was introduced with a few light-hearted words by Val McDermid, herself a St Hilda’s alumna and now a Grande Dame (indeed The Grande Dame) of crime writing, over Friday evening dinner with the title of ‘From Victims, Vixens and Vamps to Valkyries, Vanquishers and Victors’ which aptly describes how the second wave of feminism in crime fiction reversed the formerly restrictive role of women in hard-boiled crime writing. Sadly, Val told us that she will be retiring from the committee of the St Hilda’s Crime and Mystery Conference.

We began on Saturday morning with two writers who can fairly be said to have been ground-breakers not just because they were women but because they elevated what had been a fairly run-of-the-mill style of writing into something rather more literary and bolder in theme. They were Josephine Tey and Patricia Highsmith. The multi-award winning Andrew Taylor, in my view one of the best of modern crime writers, wrote of the matchless subtlety and ambivalence in the characters Tey depicted in her novels and of her interest in their nature rather than intricacies of plot. Sarah Hillary, whose first novel, Under Someone Else’s Skin, won a Theakston’s Old Peculier Award and has since published five more, spoke of how Highsmith was not afraid to transgress boundaries as she did so memorably in her Ripley novels and in Strangers on a Train.

The next speakers were Nicholas Utechin and Graeme Macrae Burnet.  Nicholas is an Honorary Member of the Sherlock Holmes Society of London and former editor of The Sherlock Holmes Journal and a considerable fount of wisdom on all matters Holmesian. He told us the Holmes novels were not greatly successful but when the short stories were published in The Strand Magazine, they immediately became immensely successful and Holmes never looked back although Doyle became heartily tired of his creation and tried to polish him off at least once. He singled out for praise Doyle’s use of short, pithy phrases particularly noticeable at a time when writing tended towards the verbose. Graeme’s book, His Bloody Project, about a brutal triple murder in the Scottish Highlands in 1869, was short-listed for the Booker Prize in 2016. But he also has written several French-set detective novels hence his interest in the immensely prolific Simenon and of how that author, always beginning with strong and evocative openings, chose to depict how easily the apparently everyday and banal can become sensational and shocking.

The afternoon sessions opened on quite a different subject: the contribution to crime-solving in real life by forensic science. Lin Anderson whose forensic scientist Dr Rhona Macleod has featured in 13 novels. Lin emphasised the over-riding importance of character in fiction but also emphasised how swiftly forensic scientific techniques develop and how necessary it is for real-life investigators and writers alike to keep up to date. Forensic science professor Niamh Nic Daeid then gave a really fascinating talk on developments in forensic science in history and the present day, ranging from firearms to fingerprints to handwriting right up to DNA and the publication this year by the House of Lords Science and Technology Committee of their report, Forensic Science: A Blueprint for Change. She stressed how important it is for judges and lawyers involved in criminal trials to understand forensic scientific evidence. And all crime writers tackling modern day crime scenarios should endeavour to get familiar with the subject. 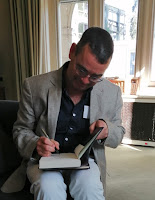 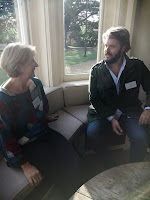 d Hill and Will Dean (see photo right) on Peter Hoeg’s Miss Smilla’s Feeling for Snow. Mick described how Hill, although using the tried-and-tested ever-popular formula of senior police detective plus junior sidekick in his police procedurals, liked to include literary allusions such as reference to Homer’s Iliad in his writing not just in those but in the various others he wrote in other genres within the crime fiction canon.Will who lives in Northern Sweden in an isolated site, is much influenced by his environment and also by his awareness of post-colonial Legacy. Smilla is herself part-Danish and part-Inuit and the plot concerns her attempts to show that a small boy who fell from a snow-covered roof did not fall but was pushed. These attempts lead back into Denmark’s highly questionable colonial past, and the story’s post-literary status is apparently illustrated by Smilla’s failure to bring her quest to a conclusion 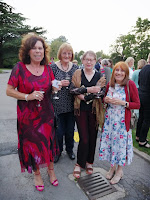 We gathered at 7,45 pm for drinks on the lawn, which was followed by a splendid dinner in honour of P.D.James with a highly teasing who-dunnit written by and ‘mistress-minded’ by Natasha Cooper.

On Sunday morning the Guest of Honour Lecture was delivered by Denise Mina who was on sparkling form. Denise’s first novels were the Garnethill trilogy set in her native Glasgow; since then have followed several stand-alones and two more series, at least one book based on real-life crimes, and even comic collections and graphic novels. She has been described as a mixture of rage and humour; I must say it was the humour and the zest for life which came across rather than the anger. But she did say that all crime writing is political by its nature and is about social issues. Reader and writer should be drawn into the story by the central character and his/her story arc.

The final talks were given by the duo who write as Nicci French and by Mary Paulson-Ellis on the acclaimed author Kate Atkinson whose Jackson Brodie novels are both exciting and entertaining and of high literary standing The Nicci French novels are in the psychological genre, which began with The Memory Game. I am afraid I missed both speakers; looking back something I regret.

However, I am looking forward to the 2020 St Hilda’s Conference and am wondering what changes there will be. My own preference would be for more emphasis on Oxford writers, of the past, not just Dorothy Sayers and Colin Dexter but others such as Michael Innes and Edmund Campion, and of the present. It was good that Oxford resident Mick Herron has appeared two years running, but are there no others? Either from Oxford itself or from the  surrounding area?