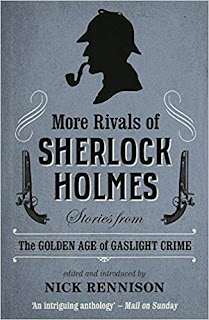 The Missing Heir (1896) by Herbert Keen, begins the compilation.  An unassuming clerk, Mr Perkins, receives an intimation of good fortune from the mysterious Mr Farquhar Barrington.  Perkins sensibly consults his friend, retired detective Mr Booth, before signing a financial agreement with Barrington.  But will Booth’s skepticism cause Perkins to lose his inheritance altogether?

In Ernest Bramah’s The Tragedy at Brookbend Cottage (1914), the brilliant, blind detective Max Carrados is engaged by Lieutenant Hollyer who has a hunch that his sister, Millicent Hollyer, is about to be murdered by her unfaithful husband.  Another matrimonial mismatch follows in The Arrest of Captain Vandaleur (1899) by LT Meade and Robert Eustace.  Walter Farrell, a successful businessman, has become addicted to gambling, a habit which is squandering his fortune and ruining his wife’s health.  Can the investigative expertise of Florence Cusack save the situation?

One Possessed (1913), by EW Hornung, describes how Dr John Dollar uses psychology to investigate the erratic behaviour of a wife who appears to “be losing her reason.”  In the next story, JE Preston Muddock’s Glaswegian Detective, Dick Donovan, seeks to retrieve The Jewelled Skull (1892).  Muddock’s detective predated Holmes and was, according to some critics, even more popular with readers than the Baker Street detective.

Horace Dorrington, the detective created by Arthur Morrison, has been described as a sociopath.  In The Case of the Mirror of Portugal (1897), Dorrington tries to get his own hands on a diamond that has been stolen from a would-be client.  In 1971 the story appeared on BBC television as the 6th episode in Season 1 of The Rivals of Sherlock Holmes.  Morrison also authored the next tale, The Ivy Cottage Mystery (1895), which features another unusual detective, Martin Hewitt.  The author’s note describes Hewitt as the “antithesis” of Sherlock Holmes who attributes his successes not to genius but tenacity: “…my ‘well known powers’ are nothing but common sense assiduously applied and made quick by habit.”

Next, Judith Lee heralds three more female detectives in the compilation. Conscience (1911), by Richard Marsh, describes how Judith, a “lazy-looking girl,” employs her “inconvenient” gift of being able to lip-read, to solve the mysterious deaths of three women.  The next contribution comes from Baroness Orczy’s 1910 collection, Lady Molly of Scotland Yard. In The Man in the Inverness Cape we find Lady Molly disguised as “the landlady of a disreputable gambling-house” in order to discover the whereabouts of Mr Leonard Marvel.  Our next sleuth is the American detective Madelyn Mack.  In The Missing Bridegroom (1914), by Hugh Cosgro Weir, Mack exudes confidence and intelligence as she, along with her journalist-friend Nora Noraker and dog Peter the Great, cracks a case that has the police baffled.

A further disappearance provides the subject for The Vanished Millionaire, one of The Chronicles Of Addington Peace (1905) by B Fletcher Robinson.  This time a man has walked out into the snow leaving only his footprints behind.  Next up is The Divination of the Kodak Films (1895) by Headon Hill.  When Lady Hertlet’s diamonds are stolen from her room in Okeover Castle, the quick actions of Sir Frederick Cranstoun bring about the arrest of the perpetrators.  The jewels, however, are nowhere to be found and will remain hidden unless Detective Mark Poignand can unravel the meaning of Kala Persad’s mystical insights.

In David Christie Murray’s (1895) The Case of Muelvos Y Sagra, Detective John Pym, is more a clone than a rival of Holmes.  Keen-eyed readers will recognise the narrative as remarkably similar to a more famous tale published in February 1892 by Sir Arthur Conan Doyle.  Next, The Search for the Missing Fortune (1914) by Percy James Brebner, involves a convoluted will, strange funeral arrangements and a silver pin!

Finally, in R. Austin Freeman’s The Mandarin’s Pearl (1909), Fred Calverley regrets purchasing a pendant pearl when he subsequently finds out it is stolen property.  Convinced that the pendant is cursed he consults John Thorndyke and then the real trouble begins…

Following the success of his earlier collection, The Rivals of Sherlock Holmes, this book by Nick Rennison will appeal to readers who simply enjoy Victorian and Edwardian detective fiction for its own sake as well as academics and historians of the genre.  The editor’s succinct notes are informative, interesting and entertaining.  The influence of Conan Doyle’s writing is evident in most of the tales, but this does not diminish their value both as narratives in their own right and as artefacts of this important period in the development of detective literature.  More Rivals of Sherlock Holmes is highly enjoyable and illuminating throughout.
------
Reviewer: Dot Marshall-Gent

Dot Marshall-Gent worked in the emergency services for twenty years first as a police officer, then as a paramedic and finally as a fire control officer before graduating from King’s College, London as a teacher of English in her mid-forties.  She completed a M.A. in Special and Inclusive Education at the Institute of Education, London and now teaches part-time and writes mainly about educational issues.  Dot sings jazz and country music and plays guitar, banjo and piano as well as being addicted to reading mystery and crime fiction.
Posted by Lizzie at 15:18