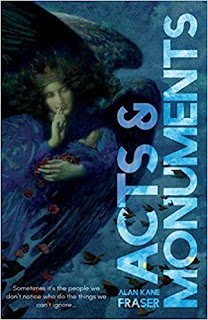 Barry Todd is a pretty ordinary bloke – late forties, overweight, balding. He lives in a medium-sized Midlands town not far from Birmingham and works for a local housing association where he tries to do some good for other people – the homeless, the unemployed, and those in financial difficulties due to cuts in social security benefits. Financially life isn’t that good for him, he would like to be able to pay off his mortgage and to help provide for his daughter just starting at university and if he could that would help to improve the state of his relationship with his wife which has been deteriorating since the death of their son. And he expects his finances to improve with promotion to the post of Head of Department – no less than he deserves, he feels, with all his experience and his years of service to the association. But Barry is, frankly, rather a plodder so the bosses of the association give the post to Barry’s colleague, the younger, thrusting, harder-nosed Langley Burrell. Barry has never got on with Langley particularly since he sacked Barry’s wife who has been unable since then to find a job, a fact which Barry and his wife have kept from the mortgage company. Not unnaturally, Barry’s resentment starts to build, not just towards Langley who has deprived Barry of his company car, but towards his bosses.

And then an opportunity comes Barry’s way. A young man for whom he had found accommodation with a housing project who was supposed to be getting over his drug addiction is found dead of an overdose. The police do not suspect foul play so there is no real reason why when Barry goes to the young man’s home, he should not take away with him a cardboard box with the few papers that the young man has. And among the papers is the young man’s cheque book. And that is when Barry begins to hatch a plan to create an elaborate plan to divert to himself some of the money that his housing association is due. And he really does intend to pay it back before too long. But meanwhile he can top up his daughter’s living allowance and pay the rent for one of the housing association’s clients, the young and attractive Rumanian, Iulia Nicolescu, whose benefits have been cut and who has been forced to turn to prostitution. Even better, when his colleague Saleema Bhatti takes voluntary redundancy and she and her husband return to Pakistan to look after her father who has to have a serious operation, he can lend her the substantial sum required for the operation. But things are becoming difficult for Barry; even though police enquiries into the fraud are half-hearted at best and their investigation into the young man’s death not much better, Barry is by now living on his nerves. And although Saleema and her husband do repay the money Iulia uses her relationship with Barry, who is now paying her for sex, to blackmail him. In return, Barry could inform the so-called Rumanian Migrants Welfare Association of Iulia’s new address, but they have threatened her with death. And Barry’s relationship with his wife is deteriorating yet further although he is too preoccupied with his own concerns to understand her despair. More and more he visits the Birmingham Art Gallery studying a particular painting – only at the end does he realise that it depicts not Peace but Death.

When I started reading this book, I was uncertain how it would rank as a crime novel. There is no violence in these pages, no grand shootouts, no international spy rings. But fraud is one of the most prevalent of crimes today and does untold damage to innumerable people. There is far too much for the police to investigate and the evidence is unbelievably voluminous, so it is only the really massive frauds which are investigated. The research on this story is extensive and feels highly authentic. And the examination of the moral framework on which we all base our lives – well, most of us – certainly provides food for thought. Recommended.
------
Reviewer: Radmila May

Alan Kane Fraser was raised and still lives in Birmingham with his wife and family. He has worked for many years in the fields of social housing and homelessness and knows the world that his debut novel inhabits intimately. He has previously written pieces for The Guardian, Inside Housing and The Local Government Chronicle, amongst others, and his stage play, Random Acts of Malice, won the inaugural Derek Lomas Award for Best New Play at the Wellington Literary Festival.