‘The Secrets You Hide’ by Kate Helm 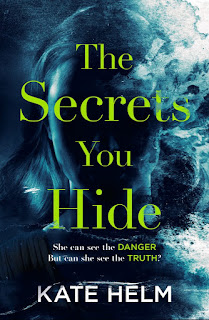 In most English (and Welsh) courts photography of those taking part in trials and related proceedings, whether criminal or civil, is not permitted. The gap can be filled by courtroom artists who sketch some of those involved in the proceedings, not actually from life which also is not permitted, but from memory and from notes made during the trial. Georgia Sage, the protagonist in this first crime novel by the author of a number of women’s novels (see the interview with Kate in the November 2018 Mystery People blog), is such an artist and, like the good artist that she is, she sees more of the psychological truth about her subjects than any photographer, particularly the evil aspects of a subject’s character. We first meet Georgia during the trial of a footballer for rape where she depicts the smug self-satisfaction of the defendant. And Georgia is going to get a really big break – a publisher is going to publish a book featuring courtroom artists with articles about trials which were particularly significant to them with full-colour illustrations by the particular artist concerned. This time, however, the publisher wants Georgia to concentrate on a case at the start of her career in which a young man had been convicted of the murder of his own mother in a fire which he had started. It was only the action of the young man’s stepfather, Jim Fielding, that saved his wife’s two children by her previous marriage. Fielding was hailed as a hero and it is that aspect which Georgia’s publisher wants her to depict. Certainly, Georgia believed at the time that her ability to portray the evil that lived behind the defendant’s youthful, apparently innocent features contributed to his conviction.

But Georgia is not too keen on the project although it will undoubtedly enhance her reputation. It is much too near her own past and certain highly distressing memories. Her name is not Georgia but Suzanne, and the facts of the trial are too like the dreadful events of her own childhood in which her own father murdered her mother and her young brother Pip but for some reason let her live. He is now in prison but the excoriating effect on Georgia has marked her personality. And now, as she travels down to the Forest of Dean to interview Fielding, not only does she begin to wonder whether he really was the hero he had been taken for. And there is another even more unnerving factor: she seems to be being followed by a young boy who seems to be Pip. But how can he be? Is Georgia suffering from hallucinations?

All this makes for an exceedingly complex yet compelling narrative through which the reader must find her way before the truth behind the fire in which Jim Fielding’s wife died emerges and a satisfying ending is achieved. Recommended.
------
Reviewer: Radmila May

Kate Helm is a successful writer of women’s fiction under her real name Kate Harrison. She has written for national newspapers and magazines including the Telegraph, Mail on Sunday, Red and Cosmopolitan. Kate also teaches creative writing and TV development in the UK and abroad, when time allows. Her first crime novel, The Secrets You Hide, written as Kate Helm, has just been published as an e-book and will be available in paperback in February 2019.