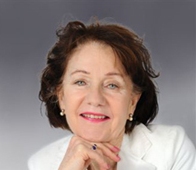 Suzette A. Hill was born in 1941 in Eastbourne, Sussex, but her life has led her to several other locations - the Midlands, Nottingham, Newcastle-upon-Tyne, Berkshire -  and finally in retirement to Ledbury in Herefordshire.
Although being an English graduate of two universities and having taught ‘English Literature all her professional life, she never contemplated doing any creative writing herself. It was only when she was sixty-four and well retired, that out of idle curiosity she thought she might try her hand at a short story - just to see what writing fiction felt like. And to her ongoing surprise A Load of Old Bones was the result.
Since then Suzette has written ten further books.

Lizzie: Thank you Suzette, for giving me the opportunity to talk to you about your writing.  There are many questions I have long wanted to ask you.  Your first book A Load of Old Bones, was the first of a five-book series set in the 1950’s and featuring the Rev Frances Oughterard.  He is an amazing character. Did you know someone who smoked continually, sucked humbugs and played the piano, or is he an amalgamation of several people, or just pure invention?
Suzette: I don’t know about being “amazing” – personally I think he is blundering and panic-stricken! His great gaffe, of course, was the murder; but he has no malice and, ironically, simply wants a quiet life. As to the fags and humbugs, I think these are pure invention – but suspect that the piano feature is a projection of the author’s envious wish.

Lizzie: I seem to recall hearing that you didn’t set out to write a series, so when you were offered a book deal for further books featuring Frances were there things in that first book that caused you a headache in future books?
Suzette: In fact, when the offer came, I was already half way through its sequel, Bones in the Belfry (kindly encouraged by Beryl Bainbridge). I had become attached to Francis and was intrigued to see what might happen next. The subsequent novels were simply an expansion of his chaotic world and the lives of his quirky associates. I do not recall a particular problem . . . other than the usual one of getting the structure and words right!

Lizzie: Why the 1950’s? Is it a period you particularly liked?
Suzette: I was a teenager in the 1950s and for some reason have always retained an instinctive affinity (nostalgia?) for that time. Giving the novels that setting is probably a self-indulgence. My last one, The Cambridge Plot, dips its toe into the 1960s, when I was a student, but I doubt if I will go much further in that decade.
However, I also feel there is a rationale behind the choice: socially that period at least seemed to have been more staid and formal than the present time, and one of my interests as a writer is showing what fearful things can go on beneath an apparently docile surface. There is almost as much danger in a drawing room as there is on the battlefield!

Lizzie: One of the things I loved about the books is the humour, particularly with the animals. How did Maurice and Bouncer come about?
Suzette: This may sound corny, but the cat & dog were the result of a dream. The trio – animals and vicar – had bizarrely emerged in my sleep, which is why I thought I would try my hand at a short story based upon them. Like Topsy the story grew: first into a novella and then eventually a saga.

Lizzie: After five books you started a new series featuring Rosy Gilchrist.  Can you tell us about her?
Suzette: With the Oughterard series finished, my then publisher urged me to use a female protagonist for my next effort, and so I dutifully tried to concoct one. Of all my characters she is probably the most ‘normal’, though I like to think not dull. Some have described her as “feisty”, which is not a term I like as it suggests someone of bulging muscles and truculent eye. Rosy is more decorous than that, being humorous, quietly independent and sensible – albeit given to occasional sparks of impatience. I respect Rosy but prefer her cronies Cedric & Felix, who in their sparring intimacy are perhaps the human counterparts of Maurice & Bouncer.

Lizzie: After three books featuring Rosy Gilchrist you wrote The Primrose Pursuit, which incidentally I was delighted to see.   Primrose was the sister of Frances Oughterard and appeared to have similar habits to her brother. How did this book come about?  And why just the one book, or is there another to come?
Suzette:         Primrose arose as an ‘inspired’ expedient, in that after I had dispatched Francis readers began to voice concern re the fate of the animals, i.e. minus their master would they starve? Would they die? Well, I could hardly resurrect the vicar, but I could make his sister (already featured) their new guardian . . . And so, the absurd escapades started over again. Primrose, of course, is the antithesis of her nervy brother: bold, bossy, opinionated and assertive. In fact, terrifying really, but she has a good heart! . . . And yes, I am writing a sequel – but cannot predict its publication

Lizzie:                When embarking on a new book, what area of the book challenges you the most?
Suzette: Alas, plotting is my bugbear: I cannot do it! All my books are character-driven, and generally speaking events evolve out of scenes and conversations. In some ways not being able to plot is useful in that it means I am telling myself a story. On the other hand, it can create a lot of angst, frustration and tearing of hair. A preconceived narrative structure must be so reassuring. I could expand on this but the topic is too painful!

Lizzie: There is a saying ‘Write what you know’. Frances is a Vicar and Rosy works for the British Museum. As you have been a teacher all your working life did you ever consider making your protagonist a teacher?
Suzette: No never. It is true that my professional life was in teaching (mainly adult education); but stimulating though that was, there is a world outside which also claimed my attention and enjoyment and whose features I got to know quite well.

Lizzie: So, what next?  Another Rosy Gilchrist? Or something completely different?
Suzette: I thoroughly enjoyed writing The Cambridge Plot and feel that its characters and academic ambience have further potential. So yes, I rather hope to do a follow-up. (And who knows, perhaps set it in 1962!)