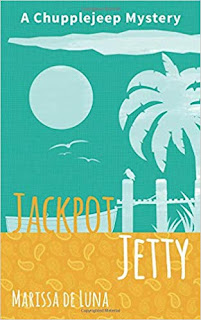 Summer in Goa and Detective Arthur Chupplejeep is on holiday with his on-off fiancée Christabel in spite of the fact that he cried off the wedding a month before it was due to take place. She has not quite forgiven him, although she does admit to herself that she loves him. They are now staying in the little lakeside house that had belonged to Chupplejeep’s adoptive mother and expecting to have a quiet and peaceful time together. Of course, that doesn’t happen.

Just as they arrive Chupplejeep’s childhood friend Dilip Mendoca informs him that a body has been found in a boat and as a detective with a formidable reputation Chupplejeep should be involved. The dead man is Ranjit Bhobe, a boatwalla who rowed visitors around the lake. Although the local detective Vitek Kumar is reluctant to admit there could be anything suspicious about Ranjit’s death and would prefer a finding that the death was caused by Ranjit’s drunkenness, as is his widow Talika whom Chupplejeep thinks is not quite as grief-stricken as she first appears to be although his daughter Roshi is distraught and determined that the killer be unmasked. Talika is also comforted by Sneha Dhanjeet who runs the local retreat. Christabel signs up for sessions at the retreat and there encounters several people who have possible connections to Ranjit. And there is Vadish, a local gangster who is under instructions from his boss to eliminate someone . . . But murder is perhaps a step too far for Vadish.

A number of lively and interesting characters appear in this third contribution to the Chupplejeep series in which the author portrays Goa which, although nowadays an integral part of India, has its own distinct culture and cuisine (particularly important for Chupplejeep and Christabel), arising from the lengthy Portuguese colonisation, where members of different religions live in harmony. Recommended.
------
Reviewer: Radmila May

Marissa de Luna is an up-and-coming young author with a passion for writing, travel and adventure. Marissa grew up in Goa before she moved to Oxford but her time spent in Goa has always been an inspiration to her. On a recent trip there, in awe of the tranquility and charm of the rural villages, she conceived the idea of Detective Chupplejeep. Under the Coconut Tree is her third novel. It is the first book in the lighthearted Detective Chupplejeep series