‘The Stone Circle’ by Elly Griffiths 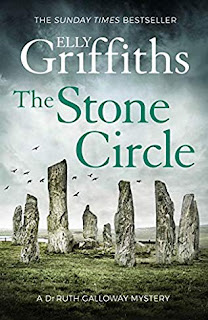 When DCI Harry Nelson receives an anonymous letter telling him to go to the stone circle. It brings back memories of his first meeting with Dr Ruth Galloway and the child’s bones found on the Saltmarsh.* The note has the same resonance as those written 10 years ago – but the writer of those letters Eric Anderssen is dead.

Ruth’s life ten years on appears settled, she still lives in the same cottage, one of three on the edge of the Saltmarsh. Despite its inconvenience for a single parent, with a child, Ruth loves it, and her large ginger cat Flint.  She has met Frank, a teacher at Cambridge, also a single man with two grown-up children.  Her meetings with Nelson are now just a regular every other Saturday when he calls to collect 7- year-old Kate. She likens them to two TV presenters handing over to the weather forecast. ‘How are you?’ ‘Fine. Getting sick of this weather.’

When Nelson contacts Ruth about the letter she tells him that a team have found a second circle and that she is planning to visit the dig. Nelson says he will drop by.

On reaching the dig Ruth astounded to discover that Erik’s son Leif Anderssen is in charge of it. They have already had some finds dating back to the Bronze Age. While Nelson is showing Ruth the letter, they are alerted by one of the Archaeologists that they have uncovered some bones which Ruth is quickly sure are relatively recent, between ten and thirty years, and they are of a child.

As Nelson and his team work back the name of a twelve-year-old girl Margaret Lacy surfaces. She went missing in 1981 attending a street party on the day of Charles and Diana’s wedding. With a case thirty years old, the investigation team have to find and interview anyone who worked on the case and any suspects the investigation officers turned up.  As with all the books in this highly acclaimed series there are surprises after surprises as Nelson and his team seek to find the killer of Margaret Lacey, and the more they learn the more they are drawn back to the past.

This is the 11th in the series and Ruth Galloway still works at the University of North Norfolk, but her boss Phil is now married to her friend Shona.  DS Judy Johnson is married to Ruth’s Druid friend Cathbad, the latter being one of the most fascinating characters in the series. I started off being wary of him in the early books, but now I just love him, although as wife Judy says he can be frustratingly enigmatic, and DCI Nelson’s wife Michelle is pregnant and due to give birth soon.  But the situation between Ruth and Nelson remains unresolved. Ruth is relatively happy with her life and things with Frank are progressing, although the sight of them together unsettles Nelson considerably. Will this relationship of Ruth’s force any decisions for either of them?

I have read and enjoyed every book in this series, but this is the best yet.  It is as always good to catch up with all the fascinating characters that have developed over the series. And as ever an intriguing mystery with many surprises along the way.  Cleverly and intricately plotted I couldn’t put it down and highly recommend it.
------
Reviewer: Lizzie Sirett
*The Crossing Places 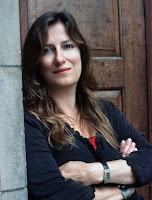 Elly Griffiths is the author of a series of crime novels set in England’s Norfolk county and featuring forensic archaeologist Ruth Galloway. The first in the series, Crossing Places, earned a good deal of praise both in Griffiths’ native country, England, and in the U.S. Since then Elly has written eleven further novels featuring forensic archaeologist Ruth Galloway.  The most recent is The Dark Angel. Recently she has written a second series set in the 1950’s featuring magician Max Mephisto and DI Stevens. There are four books in the new series. Click on the title to read a review of Elly’s latest Max Mephisto Book. The Vanishing Box .
www.ellygriffiths.co.uk