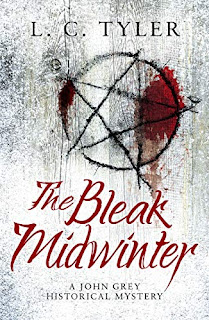 John Grey, lawyer, recently of Lincoln Inn in London is now Sir John Grey, a title bestowed upon him by the King’s spymaster Lord Arlington for dubious reasons best not investigated too closely. John has now returned to his home in Clavershall West in Essex having, on the death of his mother, inherited her estate. He had also acquired a wife Aminta, daughter, according to the parish records, of Sir Felix Clifford who has long been a thorn in John’s side. John is also the local magistrate,

The book opens with a maiden of the village visiting the local witch Alice Mardike seeking a witches curse to kill her recent lover who has spurned her and married another.  Alice is non to keen. It’s 1668. They hanged her mother for witchcraft and once your mother has been hanged for witchcraft there weren’t many things you could do except become a witch yourself and hope things work out better next time round.’

When the disfigured body of George Barwell is discovered in the woods, the word ‘work of the devil’ spreads like wildfire around the village and it’s a small leap to fix the blame on local witch Alice.   As Ben Bowman, village inn-keeper and reluctant constable says to John Gray – ‘You need to arrest Alice Mardike and give her a fair trial. Then you need to string her up by the neck.’

The leader of the pack howling for blood is Barwell's father-in-law, William Taylor, keen to try the tried and tested method of throwing Alice into the millpond to see if she floats as a witch or drowns as an innocent woman. Not much of an option in my view.  John Grey is beset on all sides - by William Taylor who holds quite a sway on the villagers being rich, and by the local Rector who preaches from the bible quoting chapter and verse that ‘thou shalt not suffer a witch to live.’  John Grey doesn’t recall that particular chapter and verse as relating to witches but if the Rector doesn’t know his bible who does?

With the village snowed in John Grey needs to solve the mystery of George Barwell’s death and quickly, if he can’t its curtains for Alice.  He sets out to interview each and everyone concerned to ascertain the truth, and he gets into all sorts of trouble doing so, and not only with the suspects, but with the weather so bad Aminta has decided he should stay indoors. Many secrets emerge from his enquires but will they help him unmask the killer?

This is a marvellous entry in this enthralling series.  I just loved it.  The characters leap off the page at you.  The mystery is intriguing, and the dialogue is clever, witty and funny. Don’t miss this gem. Most highly recommended.
------
Reviewer: Lizzie Sirett

L. C. Tyler was born in Southend, Essex, and educated at Southend High School for Boys, Jesus College Oxford and City University London. After university he joined the Civil Service and worked at the Department of the Environment in London and Hong Kong. He then moved to the British Council, where his postings included Malaysia, Thailand, Sudan and Denmark. Since returning to the UK he has lived in Sussex and London and was Chief Executive of the Royal College of Paediatrics and Child Health for eleven years. He is now a full-time writer. His first novel, The Herring Seller's Apprentice, was published by Macmillan in 2007, followed by A Very Persistent Illusion, Ten Little Herrings, The Herring in the Library, Herring on the Nile, Crooked Herring, Cat among the Herrings and Herring in the Smoke, . The first book in a new historical series, A Cruel Necessity, was published by Constable and Robinson in November 2014. Since then he has published four further books in this series. The latest being The Bleak Midwinter. His latest Ethelred and Elsie mystery is Herring in the Smoke