‘The Last’ by Hanna Jameson 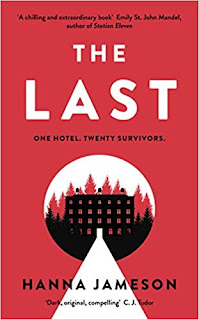 I thoroughly enjoyed this book as it is something a bit different. The Last is one for those who like crime novels with a difference as it is a skilful blend of dystopia, psychological thriller and murder mystery.

The IRISH TIMES quoted it as ‘A Post-Apocalyptic Version Of Agatha Christie's And Then There Were None . . . The Last Delivers on Its Intriguing Premise as The Veneer of Civilisation Wears Away and A Collective Savagery Starts To Take Hold.’

American Jon Keller is at breakfast in a Swiss Hotel when the news breaks that nuclear bombs have gone off in the USA and the UK and then other places across the world. Is this the end of mankind? The hotel becomes chaotic as people make snap decisions about whether to leave or not. Should they go and face whatever is out there? Or stay at L’Hotel Sixieme and wait to be rescued? Jon is at the hotel as part of a conference. His wife and children are still in the USA and he has no idea whether they are alive or dead. As there are unlikely to be any flights out, Jon stays on at the hotel and waits.

There is hysteria and several suicides in the early days as more news filters through. Soon the transmissions and connections to the outside world stop. Some people stay in their rooms, but Jon needs to keep occupied and gets involved in the day to day running of things. There are just 20 people left in the hotel, maybe the world. The hotel is a long drive from the nearest city and is isolated. Days turn into weeks and no one comes to rescue them. The small community settles into new habits and makes adjustments so that they can survive. The sun is hidden behind the clouds but there is no rain. Plants and trees begin to die. The birds and animals disappear. There is a constant fear of radiation and food and the water supplies are diminishing.

When a group go to check on the levels in the rooftop tanks, they make a grisly discovery. A child’s body is floating in one of the water tanks. Jon begins to investigate who she is and how she could have got there, and whether the murderer is still in the hotel. But the process is divisive, and the small society begins to implode. Soon no one knows who they can trust.

Written in the form of a journal, chronicling the day to day activities of survival, works brilliantly for this book as the reader has no idea of the final outcome of the narrator. The hotel has a dark history of murders and suicides and this adds to the tension. For a long time, I kept wondering if the whole situation was some kind of large scale social experiment as the narrator is quite unreliable and holds things back. But maybe, the worst has happened and what is left of society is on the brink of collapsing into savagery - if it hasn’t already done so.
-------
Reviewer Christine Hammacott

Hanna Jameson published her first novel, Something You Are, when she was just twenty-one. It was nominated for a CWA Dagger. She has lived in Australia and travelled the USA, Japan and Europe